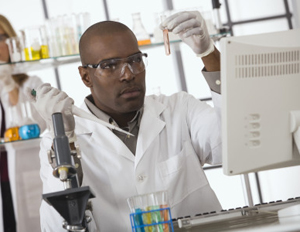 After all the talk, recently, about the lack of diversity at tech companies, it might be surprising to learn that college-educated blacks and Hispanics have benefited enormously from the tech jobs boom. A new report published by theÂ Progressive Policy Institute titled,Â Tech Opportunity for Minorities and Women: A Good News, Bad News Story, found tremendous job creation in tech occupations since the economic recovery began in 2009.

From 2009 to 2014, blacks with a college degree gained slightly more tech jobs than healthcare jobs–employment rose by 79,000 in computer and mathematical occupations (a 58% increase) compared to a 76,000 gain (an 18% increase) in healthcare occupations. It turns out that tech jobs can be a source of economic opportunity and upward mobility for an increasingly diverse American population, the report found.

“That’s because the tech/info jobs boom is much broader than in Silicon Valley. Tech jobs are increasingly found across all industries and the country. Tech jobs are in finance, education, and government; and urban tech clusters are forming in U.S. cities such as New Orleans, New York, and Denver,â€ the report reads.

While the employment gain is the good news, there is unfortunately some bad news.

America’s pre-occupancy with Silicon Valley’s intolerance is having disastrous consequences. “Universities and colleges, for example, are failing to adequately adjust to the labor market’s signals. They are pushing too many science-minded people into healthcare jobs, leaving vast numbers of high-wage tech jobs unfilled,â€ says the report.

In addition, women are not equally sharing in the tech jobs boom, accounting for just 26% of the college-educated tech job growth from 2009 to 2014. The report reveals that science-minded women are disproportionately choosing healthcare-related majors, such as biology and health sciences, over computer and information sciences (CIS).

“I find it troubling that in an era of great technological disruption and stratospheric growth in the communications space—where … innovative solutions for people, businessesÂ and governments, domestically and globally, are connecting, improving and transforming lives in placesÂ previously discounted—too many of our citizens remain stuck on the wrong side of the opportunitiesÂ divide,â€ remarked FCC Commissioner Mignon L. Clyburn at a PPI forum held withÂ Georgetown University’s Center for Business and PublicÂ Policy, last week.

In her speech, Clyburn did not let companies like Facebook, Google and Apple off the hook, and she challenged community organizations, religious institutions, the media, and schools, as well. She asked for more involvement from local role models.

“Efforts by tech companies to expand pipelines are only part of the solution,â€ said Clyburn. “We can all do more. Each of us has the ability to identify, challenge, and stamp out barriers and craft common-sense solutions.â€

The report made a few recommendations:

All the data shows that the companies that are the most diverse are the most successful. – Dean Garfield. #TechOpportunity