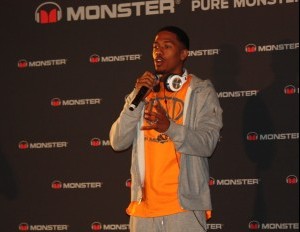 “Not everybody can afford a $400 pair of headphones,â€ says America’s Got Talent host Nick Cannon. So when he started working with headphone giant Monster Cable and its CEO/designer Noel Lee wanted to create a product that had the same sound, same quality and same appeal as other high profile lines that Monster created before, but at a price point that middle America could stomach.

“The brand Ncredible has always been about the community and youth empowerment and being able to make an incredible statement…I wanted to get everything that all of those other high profile Beats headphones did,” says Cannon. “I wanted to do the same thing, but at the same time make it more affordable and more connected to the community.â€

In partnership with Monster, Cannon launched NCredible N-Tune On-Ear headphonesÂ  at CES in 2012. This year the line was upgraded to include an expanded line of colors. The lightweight brand with tangle-free cables is designed for comfort and ease of use. He also has the NCredible N-Ergy In-Ear headphones line, which produces a big sound for a compact headset. When not being used, the two ear buds magnetically snap together to create a neck chain. And this week they introduced N-Pulse, over-ear headphones designed for disc jockeys.

Many people know Monster as the company behind the highly popular (and highly priced) Beats by Dre. The manufacturing agreement between Beats and Monster dissolved at the end of 2012 so to recoup the massive success of the product associated with rapper/producer Dr. Dre, Monster recruited a new team of celebrities including Cannon, professional drummer Shiela E, fashion icon Tyson Beckford, NFL quarterback Drew Brees and legendary boxer Sugar Ray Leonard, among others.

Cannon’s Ncredible headphones start out more reasonably priced at $129.95, but the other lines range in price upwards of $400. Monster capped off their CES appearance with an Alicia Keys concert.

Check back at BlackEnterprise.com/Tech for CES 2013 coverage.