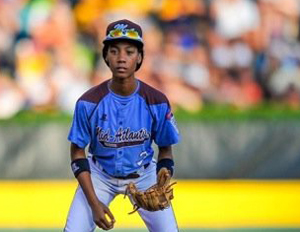 According to Newsworks, Mo’ne Davis, the young female pitching sensation of this year’s Little League World Series, will lead her team, the Taney Dragons, to kick off the Macy’s Thanksgiving Parade in New York City.

Ever since Davis’ pitching performance in the Little League World Series, she has been featured on TV shows and magazines. She will lead her team from Philadelphia at the parade.