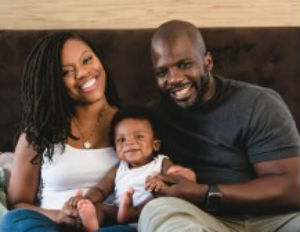 When 31-year-old first-time mom, Tamara McNeil, grew frustrated with searching for books featuring black characters, she took matters into her own hands and createdÂ Just Like Me!, a perfectly curated subscription book box filled with African American children’s books and other fun educational tools.

Considering “3,500 children’s books were published in 2014, but only 180 were about black people,” according to a study by the Cooperative Children’s Book Center at the University of Wisconsin, McNeil figured there were probably other mothers who felt the same way.

By day, McNeil is a public relations director for a national nonprofit, and by night, she’s juggling the role of wife, mother, and entrepreneur. Black Enterprise caught up with the busy mom to learn more about her journey.

BlackEnterprise.com: Tell us about the defining moment when you decided to start your business?

McNeil: During my research, I found multiple children-focused subscription services that were really cool. The one in particular that caught my eye was travel focused. Each month they feature a country and send your child educational information about it. The countries they feature are mostly European. I think the only country featured from the African diaspora was South Africa. I came across a comment from a black woman asking why their choices were limited to primarily European countries. Someone replied to her comment and said something like ‘this is a great company and they already feature South Africa. Instead of complaining you should create your own and you can feature every country in Africa if you want.’ That snarky comment resonated with me. I decided I would create my own subscription box totally dedicated to children’s books with black protagonists. I knew there had to be other frustrated parents just like me and instead of waiting to be included, I decided to create.

What makes your business unique?

I identified a void that needed to be filled. Black children need to read stories with characters that reflect them. They need to see that they are beautiful and can be doctors, ballerinas, or whatever their glorious minds can conceive. We all know that you can’t be what you can’t see, so exposure is key. I believe that most parents want to expose their children to something greater. Books are an affordable way to do that.

How did you get the funds to start your business?

My husband and I invested our personal money to start Just Like Me! Box.

What are the daily habits that have taken you from concept to execution?

Because I’m a new mom and work full time, my time is extremely limited. What has contributed most to my success is cutting distractions that are counterproductive. That could include television, social media, etc. Sometimes I only have two hours a day (and most times it’s not a consecutive two hours) to work on Just Like Me! I keep a pretty solid to-do list that helps me prioritize my tasks. Waking up an hour earlier to pray, journal, and complete a simple task or two before starting my normal morning routine helps a lot as well.

Cities With Most and Least Student Loans