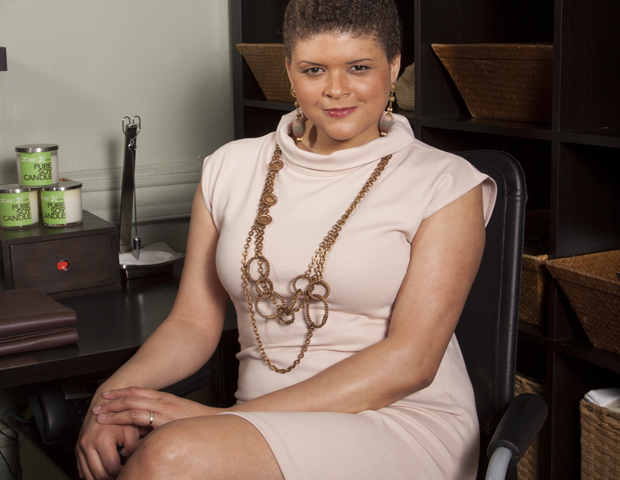 It took traveling to Europe and South Africa amid the flashing lights of fashion shows and photo shoots for former model Deanna K. Hains to discover she was not living life on her own terms. “I got into modeling because so many people told me it was something I should do. I was pushed into it but that was not my passion whatsoever,â€ she recalls.Â  “I would be gone for months and was homesick and never made friends with the other models.â€Â  After 10 years of being unfulfilled in a career where she was earning $50,000-$70,000 per year, she finally decided to give up the catwalk and attend college at New York City’s Fashion Institute of Technology, where she focused on studying interior design.Â  While enrolled at F.I.T. she experienced a fluke that would result in the establishment of, Zen Home Cleaning an eco-friendly luxury home cleaning service that utilizes non-toxic supplies.

The idea to start Zen was sparked after realizing that her hectic schedule as a college student and waitress didn’t afford her the opportunity to keep her home as organized as she wished. As she perused Craigslist, she discovered a cleaner who used green products and hired him for a session. Pleased with the results, Hains decided to contact her ex-boyfriend, a real estate agent with a knack for cleaning and organizing. Hains recommended that the two put up an ad on Craigslist offering his cleaning services for apartments while he was unemployed during a dip in the real estate market. One ad later and Hains was booking numerous clients. However, when her ex-boyfriend returned to the real estate sector after landing a major deal, she was faced with deciding whether to focus on college degree or her booming business.

“When I started the business I would be in class and my phone would constantly ring,” Hains says.Â  “My professor pulled me out of class one day and told me to focus on the business since it was going so well and that I could always return to school.â€

With those encouraging words, Hains dropped out of college and left behind her goal of becoming an interior designer to officially launch, Zen Home Cleaning.Â  In the process she fully developed the business model, hired her first few employees and most important of all discovered her true self.

“I didn’t think at first that this was something that would make me money as a new career,â€ she reflects.Â  “What made me persevere was that it was my passion.Â  Because I love interior design I always gravitated to things that looked great.Â  Starting this company helped me find my calling since I could recreate spaces.â€

For Hains the success of her company has its challenges and advantages. She admits that remaining accountable to her staff of 45 employees is a challenge especially during a recession.

“Managing your own medium-sized business is difficult because you want to make everyone happy from your employees to your clients,” she says. “You have to do this while making money, and in this economy you cannot give as much as you want to.Â  So, I have to find [other incentives] to motivate my employees.”

Still for Hains, the challenges are worth the joy of being self-employed and giving back. “The best part is knowing that I’m doing something I love and that’s good for the environment.Â  Plus, I make a little bit more money.”