Balcony Where MLK Was Shot Will Open to Visitors 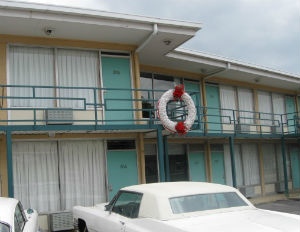 The balcony of Memphis’ Lorraine Hotel, the place where Martin Luther King was shot and killed, is being opened to public visitors, according to Raw Story.

Connie Dyson, the museum’s communications coordinator, said the upper-floor balcony will be open from November 19 as the historic landmark in downtown Memphis undergoes a $27 million facelift due to finish in early 2014.

“It is our most unique artifact, the balcony,â€ Dyson told AFP by telephone.

“But with the entire Lorraine building being closed during renovations, we wanted to offer the public an access to the balcony and the room where Dr King stayed, since that was one of the highlights of the (pre-renovation) tour.â€

With its slightly disheveled bed, black dial-up telephone and unfinished cups of coffee, Room 306 has been left untouched since the evening when King, 39, was fatally shot at the height of the civil rights movement.

“Nobody’s ever stayed in the room (since King’s death). It’s been a shrine ever since,â€ Dyson said.

A photographer for Life who visited the scene Â of King’s shooting just hours later remembers being able to walk around on the balcony shortly afterward, and watching the brother of the hotel owner mopping up King’s blood. “I was very, very surprised at how desolate it all was,â€ Groskinsky told LIFE.com about the neighborhood around the motel. “But then, people probably thought that the person who shot Dr. King might still be out there somewhere.â€

Black Unemployment Above 10 Percent for Last Half Century

Obama has Four-in-Five Chance of Re-Election on Tuesday