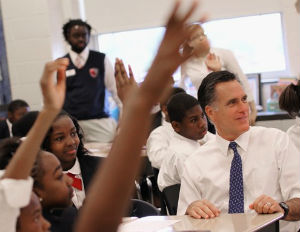 A much-discussed poll from this summer showed Mitt Romney capturing zero percent of the black vote. But Krysten Clark of Jack & Jill Politics, writes that Romney’s initiative to improve his standing with African Americans – the Black Leadership Council – is a token, ineffective afterthought.

Since its unveiling, the Black Leadership Council blog has only been updated one time. Fail! …

Black conservatives have publicly expressed their discontent with the Romney campaign’s indifference. Crystal Wright, a columnist and political commentator whom I admire, has said on Twitter this week that the GOP has ignored the black vote and failed to deliver messages to the black community. She also criticized the Republican National Committee for spending millions of dollars on Latino outreach, but zero on targeting African Americans.

Instant Gratification? Sure. But It’ll Cost You