Here's What You Missed at the Harlem Literary Brunch 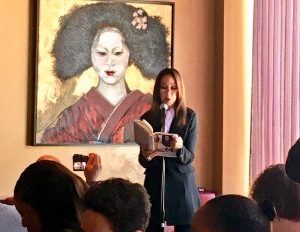 The Harlem Literary Brunch was a hungry reader’s delight. Powered by 37 INK, an imprint of Simon & Schuster, and sponsored by Morgan Stanley, the brunch provided readers with an intimate opportunity to connect with highly esteemed black authors, while enjoyingÂ delicious southern and Caribbean cuisineÂ at The Cecil, in Harlem on Feb. 10.

After mixingÂ and mingling, the uptown crowd was introduced to writer and activist Tiffany Dufu, who shared a powerful passage from her newly released book,Â Drop the Ball: Achieving More by Doing Less.

Afterward, legendary supermodel Pat Cleveland shared an explicit excerpt from her memoir,Â Walking With the Muses: A Memoir, which invites readers to journey through her illustrious career in fashion.

Finally, Erica Armstrong Dunbar, a distinguished professor of Black American Studies and HistoryÂ at the University of Delaware, talked about the fascinatingÂ discoveries she found while researching and writing a book on Ona Judge, a slave owned by George Washington, who escaped and lived most of her life as a fugitive. Dunbar also read a chilling passage from her latest book, Never Caught: The Washingtons’ Relentless Pursuit of Their Runaway Slave, Ona Judge.

Following the event, DufuÂ spoke to Black EnterpriseÂ about the importance of celebrating black writers.

“I believe in the power of diversity. The more diverse the ideas, the more diverse the perspectives that are brought to the table, the better we can solve complex problems,” she said. She continued, thanking Morgan Stanley and 37 INK for “giving life to our voices. I think it’s very important, and I’m very happy to be here.â€

Dufu, who will be featured at BE‘s Women of Power Summit next month, also dropped a teaser about what attendees should expect at the convention.

Michael Brathwaite, vice president of Investments CFP at Morgan Stanley Smith Barney, said he was happy to attend an event that celebrates culture and diversity.

“What I like about the event is that it combines culture, and certainly, in most cases, African American culture. Also, it shows Morgan Stanley from a different perspective. Most clients and most people in the world don’t imagine that Morgan Stanley gets involved in these types of events,” he told BE.

“We’re a very diverse firm, and we believe in inclusion of all types,” he added. “Everybody knows us for finance, but culture is just as important, if you really think about it.â€