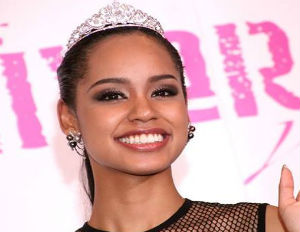 Ariyana Miyamoto made history this month as the first biracial Miss Universe Japan. The stunning beauty was born to a Japanese mother and African American father, making her “haafu”—the country’s term for half Japanese.

Despite Miyamoto’s standout beauty and intelligence, the 20-year-old still endured unfortunate race challenges, as she admitted to Japan Today. Even after helping to reshape Asian beauty ideals, some of the citizens of her country aren’t exactly cheering on her win.

The newly crowned Miss Universe said entering the pageant circuit was a slow move because she didn’t think her “foreigner look” would make it very far. Fortunately, that proved to be not true and she will now represent Japan in the Miss Universe 2015 competition.

Ariyana finds inspiration in another biracial beauty, who also happens to be one of the biggest female singers of all time, Mariah Carey. “She faced some racial hurdles, similar to myself, but she overcame them and became a top star, so she’s been a big influence on me.”

Crowning a Japanese and African American Miss Universe is a big deal for the queen’s country. Like every part of the world, Japan has a set list of beauty standards. For instance, Japanese women with light skin are deemed as more beautiful than those with darker skin—an issue all too familiar in American society, particularly within black communities. “Lightening creams in Japan are marketed completely differently as Asian women are looking for milky, snow white skin tone — it’s what’s considered elegant and fashionable,” according to Huffington Post. “Bleaching the skin is not only trendy, but a normal part of their skin care regimens and skincare products containing hardcore toxin hydroquinone is how it’s achieved.”

Asian women go to extreme measures to be “beautiful,” even so far as to get what is known as double-eyelid surgery. The procedure results in wider, more western-looking eyes. Kat Chow, a contributor for NPR, spoke with several Asian women about the surgery and their varying experiences. One woman, Anne Kim, revealed that despite her lack of interest in the surgery, her mother kept pressuring her to undergo it “just to make yourself prettier.” Anne said, “I felt like she was my mom, and as a mother, she was supposed to encourage me and love me…Â I have everything out there telling me I’m not beautiful – and if anything you should be the one encouraging meÂ not to get plastic surgery.”

First Lady Michelle Obama Sends a Message to Her Younger Self