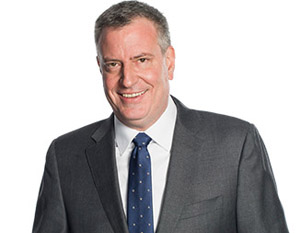 Thirteen states and the District of Columbia have already agreed to raise the national minimum wage above $7.25, but none have committed to making it $15—except New York City Mayor Bill de Blasio. Workers in the Big Apple could expect to earn at least $15 an hour by the end of 2018.

The raises will cover 50,000 workers:Â 20,000 unionized workers and 30,000 employees of outside organizations whose services are paid for by the city.Â De Blasio, who is expected to make an official announcement today, has said he wants to raise the city’s minimum wage but that the state must agree.

Democratic Gov. Andrew Cuomo has also said he was gradually increasing the minimum hourly wage to $15 for many state university workers and that he wants state lawmakers to join in his efforts to provide the same for all workers.

De Blasio has been contacting unions that represent city workers, according to reports, and his plan would add addendums to their contracts to bring them up to $15 an hour by the end of 2018. Union workers currently make at least $11.79 an hour. The plan will reportedly cost the city an additional $36 million through 2020. The plan also includes contract employees, such as teacher aides and family and infant care workers. Those employees reportedly make around $11.50 an hour and a raise will cost the city an additional $202 million through 2020.

The highest wage agreed upon by a state in terms of an increase is Washington D.C., which stands to raise the wage to $11.50. Once New York City puts De Blasio’s plan in motion, it will be the highest increase in a city in the U.S.

African American Women Make Up Only 2% Of America’s Doctors