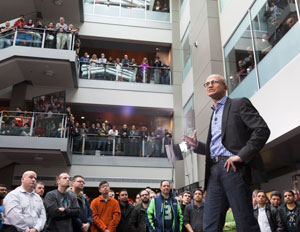 CEO Satya Nadella is purging Microsoft of 18,000 positions in the next year, in what will be the company’s largest round of layoffs since 2009.

In a press release, Nadella addressed the need to focus on Microsoft’s core services, and is eliminating as many as 12,500 positions attributed to the acquisition of Finnish smartphone manufacturer Nokia.

Nadella’s big push over the past few months of his reign as CEO has been on getting Microsoft’s cloud services on all devices, including Android and iOS platforms. “The first step to building the right organization for our ambitions is to realign our workforce,” said Nadella. “With this in mind, we will begin to reduce the size of our overall workforce by up to 18,000 jobs in the next year.”

It isn’t all bad news, however, as the company will be creating new positions. Just not 18,000 of them. “It’s important to note that while we are eliminating roles in some areas, we are adding roles in certain other strategic areas. My promise to you is that we will go through this process in the most thoughtful and transparent way possible.”

Altogether, the layoff will cost the company about 15% of its workforce, a substantial number by any means. It employs around 127,104 workers worldwide.

Microsoft’s number of employees dwarfs companies like Google, Twitter, and Facebook, but its demographics aren’t too different. Google, Yahoo, and Facebook all have a workforce that’s 2% black, with a similar number for Hispanic employees.

Microsoft’s doing a little better, but not by much. The company is 3.4% black, and 4.9% Hispanic/Latino.

Also mentioned in Nadella’s memo to employees was the decision to halt work on Nokia’s Android smartphone program, Nokia X. Instead of running Android, Nadella says the company will “shift select Nokia X product designs to become Lumia products running Windows. This builds on our success in the affordable smartphone space and aligns with our focus on Windows Universal Apps.”

Consumer Tip of the Day: Watch out for Hotel Scams