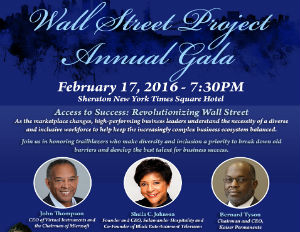 It has officially been announced that Microsoft Corp. Chair and CEO of Virtual Instruments, John W. Thompson, will speak and be honored at the 19th annual Rainbow Push Wall Street Project Economic Summit in New York Feb. 16—18, 2016, at the Sheraton New York Times Square Hotel. Thompson is a trailblazer who makes diversity and inclusion a priority, breaks barriers, and develops the best talent for business success.

Founded in 1996 by Rev. Jesse L. Jackson Sr., the Wall Street Project advocates for equal opportunities for culturally diverse employees, entrepreneurs, and consumers in the financial sector, while challenging corporate America to end the multibillion-dollar trade deficit with minority vendors and consumers. Hundreds of corporate executives, minority entrepreneurs, and community leaders are expected to convene during the three-day economic summit as Thompson will be featured in a “fireside chatâ€ during the event gala on Feb. 17, 2016.

Thompson is CEO of Virtual Instruments, a tech company that delivers the industry’s leading analytics platform for IT Infrastructure Performance Management, VirtualWisdomÂ®. He formerly was Chairman and CEO of Symantec Corp., a company he transformed into a leader in security, storage, and systems management solutions.

In addition to honoring Thompson, the Wall Street Project Economic Summit will also honor entrepreneur and philanthropist Sheila C. Johnson, founder and CEO of Salamander Hospitality and co-founder of Black Entertainment Television; and Bernard J. Tyson, chairman and CEO of Kaiser Permanente, the largest managed healthcare organization in the U.S.

“We are delighted that John Thompson, Sheila Johnson, and Bernard Tyson will be joining us, for they represent what the Wall Street Project is all about and working to accomplish,â€ says Rev. Jackson. “Thompson leads one of the most powerful tech companies in the world, while Tyson heads the largest healthcare organization in the country. At the same time, Sheila Johnson is the consummate entrepreneur and philanthropist who not only co-founded BET and became a billionaire, but who went on to build a hospitality company that stands apart due to her keen business sense and astute leadership. Each is an example of what we can accomplish when diversity is a priority as a business strategy. That is what the Wall Street Project is all about. It is not an end in itself, or a means to an end, but an evolutionary process,â€ says Jackson.

Register nowÂ to attend the 19th Annual Wall Street Project Economic Summit to be an advocate for prosperity and change. For more information on the Summit and the work of the Rainbow PUSH Coalition and Citizenship Education Fund, be sure to visitÂ www.rainbowpushwallstreetproject.org.