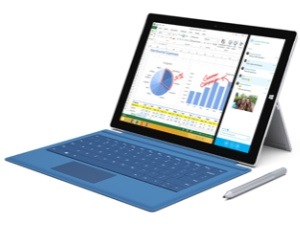 With a thinner and lighter design, the more powerful Surface Pro 3 looks like a suitable laptop or tablet replacement.

At Microsoft’s press event in New York City on Tuesday, the company unveiled the next step in its tablet-laptop combination: the Surface Pro 3.

Microsoft’s strategy with the Surface Pro 3 targets users of tablets and laptops who and wish to replace both of them with a single device.

The Surface Pro 3 is only 1.76 pounds, making it lighter than Apple’s 11-inch MacBook Air, which weighs 2.38 pounds. “It is by far, even with the cover on, the thinnest core product ever created,” Panay says.

While it resembles the previous Surface Pro 2, Panay says it’s been completely redesigned. The kickstand can bend up to 150 degrees, and the interior has a fan “thirty percent more efficient than any other fan in the market today,â€ he adds.

Instead of going with a smaller display to compete with tablets like the Nexus 7 and iPad mini, the Surface Pro 3 has a 12-inch, 2160-by-1440 display, closer to a laptop than a tablet. It has front-facing speakers that are 45 percent louder, according to Microsoft.

The tablet comes with a pressure-sensitive Surface Pen, which grants access to quick editing and note-taking features, even when the Surface Pro 3 is turned off.

Naturally, there’s OneDrive integration that syncs all your documents and data to your storage in the cloud, thus enabling notes, annotations, and other created documents to be readily available on every Microsoft device.

As for pricing, the cheapest Surface Pro 3 starts at $799 for the 64GB, Core i3 version, and ranges all the way up to $1,949 for one with a Core i7 processor. And while it was demoed on stage with its included Surface pen, the $199 docking station and $129 type cover are add-ons. It’s available for pre-order from Microsoft’s Store on Wednesday, May 21.

You can check out a video of Microsoft’s latest tablet below.

Give Employees Tryouts Before You Hire Them