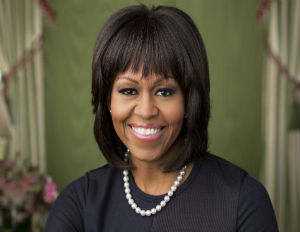 The portrait was taken in the Green Room at the White House on Feb. 12 and is a waist up close up; her official photo from 2009 was a standing full-body shot.

TheÂ first ladyÂ sits on a green chair wearing a navy and violet dress. She’s not bearing her arms as she did in her 2009 official portrait., but she sportsÂ new bangs, andÂ a strand of pearls.