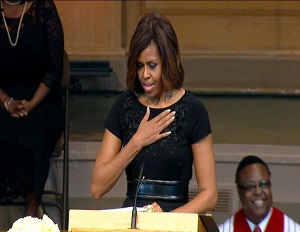 Attended by close family and friends, both first lady Michelle Obama and Oprah Winfrey addressed the crowd with tributes about the impact Angelou’s words and presence have had on their lives. The first ladyÂ  brought the crowd to its feet as she talked about how as a young black girl from the South Side of Chicago, Angelou’s words paved her way to the White House. Catch highlights from the first lady’s must-hear speech below.

“She taught us that we are each wonderfully made, intricately woven, and put on this Earth for a purpose far greater than we could ever imagine”: FLOTUS elaborates on how Angelou’s words gave us affirming power and confidence and made us all feel that we were worthy with a purpose bigger than ourselves.

“The first time I read Phenomenal Woman, I was struck by how she celebrated black women’s beauty like no one had ever dared to before”: Obama talks candidly about how one of Angelou’s most popular works,Â Phenomenal Women, celebrates the essence and beauty of black women. Like FLOTUS, this poem taught so many black girls a necessary message about embracing their God-given beauty in an era where the standard of beauty looked nothing like them.Â

“For me, that was the power of Maya Angelou’s words — words so powerful that they carried a little black girl from the South Side of Chicago all the way to the White House”: From the South Side of Chicago, to Ivy League colleges, to the top of the ladder in corporate America, to now the White House, FLOTUS makes it clear that Angelou’s words have sustained her throughout her journey as a groundbreaking black women who has often been met with loneliness and criticism.

“She showed us that eventually, if we stayed true to who we are, then the world would embrace us”: Recognizing the pain, fear, struggle, and ambitions of black women, the first lady expresses how Angleou’s words served as encouragement for her to be authentic and unapologetic about who she is as a black women. Angelou’s encouraging words also let us know that conformity is not the route to acceptance.

“She touched people all across the globe, including a young white woman from Kansas who named her daughter after Maya, and raised her son to be the first black President of the United States”: In addition to making every black woman feel like she was speaking directly to them, the influence of Angelou’s words crossed state, racial and gender lines and FLOTUS points out that because of Angelou’s work, President Obama’s mom was inspired to name his sister Maya. Thus, with an influence that crossed all barriers, Maya Angelou’s work will forever have a lasting and powerful impact on us all.

Driver Charged in Tracy Morgan Crash Was Awake for 24 Hours