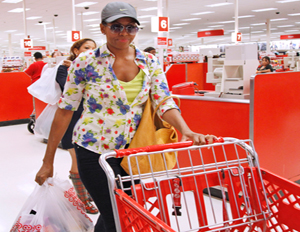 First Lady Michelle Obama sported a casual Nike baseball cap, sunglasses and a floral-print button down shirt on a shopping trip to a Target department store in Alexandria, Virginia Thursday. Little did she know she’d be snapped by AP photographer Charles Dharapak, and her image broadcasted across news outlets within a few short hours.

“It is not uncommon for the First Lady to slip out to run an errand, eat at a local restaurant or otherwise enjoy the city outside the White House gates,” said Kristina Schake, communications director for the First Lady, in a CBS News report.

The Target location was combed by casually dressed Secret Service agents a half-hour before she arrived with an assistant, according to the AP.Â  She did, however, push her own cart, filling it with toys and food for the first dog, Bo, among other things. Mrs. Obama spent a reported 30-40 minutes at the location and was only recognized by the cashier.

This wasn’t the first lady’s only encounter with the discount-friendly store. She was spotted wearing a dress from Target in Phoenix in August 2009. So tell us, does Mrs. Obama’s discount store excursion make a statement about the importance of frugality in this economy?

What You Can Learn From Harvard Law School