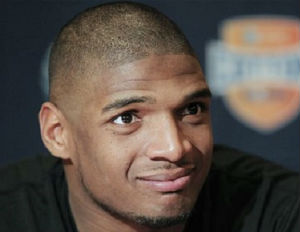 University of Missouri defensive end Michael Sam told the New York Times and ESPN he is gay. In doing so, this will make the 2014 NFL Draft prospect potentially the first openly gay player in the NFL. “I just want to make sure I could tell my story the way I want to tell it,â€ he told The Times. “I just want to own my truth.â€

The 24-year-old Sam, who just completed his senior season with the Missouri Tigers, has been stellar on the field. He was among the top pass rushers in the Southeastern Conference (SEC) with 10.5 sacks. He won the Cotton Bowl. He was a first-team all-American. The 6-foot-2, 255 pounds Sam was named the Associated Press defensive player of the year in the SEC, widely considered the top league in college football. His teammates voted him Missouri’s most valuable player.

Sam is projected to be chosen in the early rounds of the NFL draft in May, ordinarily a path to a prosperous pro career. He told reporters that he decided to come out publicly now because he sensed that rumors were circulating that he was gay. To avoid getting “outedâ€ he decided to come forward publicly.

Sam told ESPN that he had already confided in a few close friends. He came out to his Mizzou teammates last August during preseason training camp. “Coaches just wanted to know a little about ourselves, our majors, where we’re from, and something that no one knows about you,â€ Sam said. “And I used that opportunity just to tell them that I was gay. And their reaction was like, ‘Michael Sam finally told us.’ ”

The NFL released a statement in support of Sam on Sunday night: “We admire Michael Sam’s honesty and courage. Michael is a football player. Any player with ability and determination can succeed in the NFL. We look forward to welcoming and supporting Michael Sam in 2014.â€

Sarah Kate Ellis, president of the Gay and Lesbian Alliance Against Defamation (GLAAD), said in a statement: “Sam has demonstrated the leadership that, along with his impressive skills on the field, makes him a natural fit for the NFL. With acceptance of LGBT people rising across our coasts – in our schools, churches and workplaces – it’s clear America is ready for an openly gay football star.â€

“Michael Sam has made a historic and courageous decision to live his authentic truth for the world to see,â€ says Sharon Lettman-Hicks, Executive Director and CEO of NBJC. “Sam continues the tradition of breaking down barriers for not only LGBT athletes who dream of playing professional sports, but all LGBT people, young and old, who seek to live openly, honestly and safely in their neighborhoods and communities. We at NBJC salute Michael Sam for being brave enough to own his power.â€ The National Black Justice Coalition (NBJC) is a civil rights organization whose mission is to end racism and homophobia.

Despite growing acceptance and advancements in LGBT rights, the fact remains that there are no publicly gay athletes in the NFL, the NBA, the National Hockey League or Major League Baseball. Sam indeed could become a symbol for the country’s gay rights movement if he is drafted or a victim of homophobia in pro sports if he is not drafted.

It remains to be seen, of course, whether Sam’s sexual orientation will be fully embraced. There were murmurs last season that four prominent NFL players were going to come out, announcing they were gay.

The league has prepared itself in terms of management for this moment. Last April, the NFL sent a sexual orientation anti-discrimination and harassment policy to all club presidents, coaches and general managers, who shared it with their staffs, reports USA Today. The collective-bargaining agreement also includes anti-discrimination language.