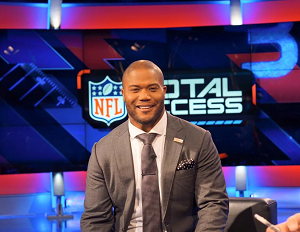 Immediately after stepping foot on the field as a rookie for the San Francisco 49ers in 2006, Michael Robinson knew the clock on his professional career had started ticking.

After earning his bachelor’s degree in advertising/public relations in three years from Penn State University and a second degree in broadcast journalism, Robinson started to map out his post-career plans in the sports industry. As a player for the 49ers, he started his own sports talk show called The Rookie Report, where he talked sports and business with players in the locker room and off the NFL field. Eventually renaming the show The Real Rob Report, Robinson continued to carve out a lane for his broadcasting career even after moving to the Seattle Seahawks in 2010.

However, it wasn’t until after he experienced an adverse reaction to prescribed medication during the 2013 pre-season, that Robinson received a real wake up call on just how short-lived an NFL career can really be.

“I try to always have a perspective and think a few steps ahead and try not to be surprised, but getting sick and getting cut surprises the you know what out of you,” the 33-year-old tells BlackEnterprise.com.

Taking advantage of the NFL’s Broadcast Boot camp, Robinson enrolled in the four-day seminar, where he learned not only the technical aspects of being in broadcast, but also built up his list of contacts at major networks such as the NFL Network and ESPN.

“They give you a notebook full of contacts of everybody in the industry and that’s something that was very valuable to me,” says Robinson. “I started calling because I thought my football career was over.”

After recovering from his health scare, Robinson was called back to the field that same season by the Seahawks on a $840,000 contract. That year, he helped lead his team to a Super Bowl championship before officially hanging up his NFL cleats in 2014.

Now, as a retired athlete, Robinson is seeing the rewards of his degree and early work in broadcast journalism. In addition to working as a sports analyst for both the NFL Network and the Big Ten Network, the former champ also uses his platform to inspire the next generation of student athletes in his hometown of Richmond, VA.

Under his foundation, Excel to Excellence, Robinson has not only created a free youth football camp, but also an on-going academic program that ensures students have the right resources and opportunities to excel in their academic endeavors.

“Athletes create these foundations and they do it for tax purposes or to put a football camp in place, and I’ve done a football camp myself, but I wanted to do something with more teeth,” says Robinson in regards to his foundation. “If I wasn’t playing football anymore and was no longer around, I want to know that this organization can still feed the community.”

How To Apply for Financial Aid Without the Stress