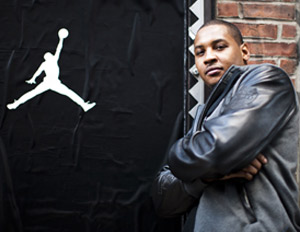 Michael Jordan hasn’t laced up a pair of Air Jordan sneakers to play in an NBA game since the 2002-2003 season, yet the popularity of Jordan Brand is arguably bigger than ever. Very few Saturday’s go by in a calendar year that sneaker aficionados aren’t lining up in droves outside of some cool boutique for limited edition retro Jordan’s.

Nearly a decade removed from his playing days, Jordan has handpicked several of the top athletes in the world to carry the brand into it’s next stages, but the question still remains whether the new crop of talent will ever be able to equal the retail appeal of the six-time NBA champion? In early fall, BlackEnterprise.com was invited to Nike Headquarters in Beaverton, OR to attend Flight Forum, an unveiling of the next round of signature shoes for Jordan Brand athletes Chris Paul, Dwyane Wade and Carmelo Anthony.

“The Brand is always looking for athletes who personify Michael Jordan’s style and passion on and off the court,â€ says Josh Benedek, Communications Manager from Jordan Brand. “Obviously our consumer is a lot more tech savvy than in years past so we try to create brand experiences that speak to that… Michael’s legacy has and still will be the foundation of the brand moving forward. The impact Michael has on the game allows us to create content that embodies Michael’s passion and determination.â€

Given the uncertainty of the 2011-2012 NBA season, the marketing team at Jordan Brand came up with a three-pronged silo concept to entice buyers into stores while their favorite stars are absent from the hardwood. The “Fly Around. Fly Through. Fly Over” campaign and the sneakers themselves are segmented to appeal to each player’s on and off court persona.

For example, Chris Paul and his upcoming CP3.V (release date scheduled for early January 2012) sneaker represents the “Fly Aroundâ€ silo because of the New Orleans Hornets point guard’s penchant for leaving opposing defenders in the dust. Designed by Jordan Design Director of Footwear, Andre Doxey, the shoe is billed as the lightest CP3 ever at 12.5 ounces. With a Flywire upper and Podulon technology in the heel area, Paul’s sneaker is all about speed. The shoe also carries personal meaning for Paul, courtesy of the 61 triangles on the shoe, which represent the number of points he scored in high school as a dedication to his dearly departed grandfather.

Technology and fit get the attention of the diehard athletes all day but Doxey, who is a 16-year veteran in the footwear industry, understands that it will take a bit more to convince the pedestrian hoops fan to spend $100+ on Jordan sneakers in this economy. “Part of our history has always been making great product first, and making it beautiful,â€ he says. “When you do that people adopt it. They’re going to play in it and they are going to wear it. So that’s our goal–period. Whether there is a season or not a season, we want people wearing the product.â€