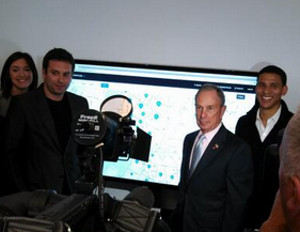 The site, whose mission is to connect people with the world around them by harnessing local expertise, was founded in 2012 byÂ Ori AllonÂ andÂ Robert Reffkin. Based inÂ New YorkÂ and currently employing over 70 people, Urban Compass has been named “Disruptive Innovator to Watch” by The Tribeca Disruptive Innovation Awards, and included as one of the best new start ups of 2012 by Business Insider.

“We think there’s a huge opportunity in the local discovery space. But it’s a complex problem that technology can’t solve by itself. In order to truly connect with the world around us, we need to make sense of both the online and offline components of local discovery,” said Founder and Executive ChairmanÂ Ori AllonÂ .

“Finding a new home is about much more than moving into a new space; it’s about becoming part of a neighborhood, joining a community of people and local businesses, and sharing local knowledge. These connections all start with where you live, and so Urban Compass is starting there,” continued Allon.

“Urban Compass aims to make it easier for people to find the right place to live inÂ New York City, and they’ve landed in one of the hottest high-tech communities anywhere,” said MayorÂ Michael R. BloombergÂ . “The innovative companies that make upNew York City’s thriving tech industry are changing the way New Yorkers do everything, and along the way they’re also boosting our economy and creating jobs.”

Urban Compass is making it easier for people to find a home they love, by combining transparent online search with a team of local experts.

The company has raised anÂ $8 millionÂ seed round of financing from investors such as Goldman Sachs, Founders Fund, Thrive Capital and a consortium of CEO’s from leading companies including American Express and ZocDoc.

Users can sign up on the beta site, by visting Â http://urbancompass.com