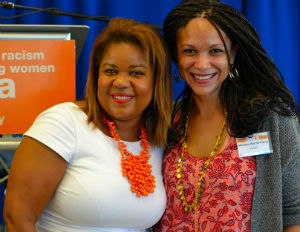 On June 2, YWCA-NYC Potential to Power Girls Symposium opened its doors to more than 200 young girls and women in the NYC area to hold an open conversation about racism, feminism, and the impact of social media on young girls today. Bringing high school and middle school girls together to mingle with powerhouse women in media, politics, and the arts, YWCA-NYC allowed inter-generational conversations to take place on some of the top social issues that affect today’s young women.

“I don’t think we always sit at the table with young women and allow them to be our peers instead of always trying to teach them something,â€ said Melissa Harris-Perry in regard to the open conversations the teenage girls and women of influence were allowed to have. “For me that was valuable. I wasn’t here to give a lecture or motivate them. I was here to listen and I found that very important.â€

The event welcomed more than 50 women, whom they referred to as influencers, to enter dialogue with the teens about topics that are typically ignored in the classroom. In addition to MSNBC’s Melissa Harris-Perry, other influential women who attended the event included Alia Jones-Harvey, leading female producer on Broadway, Leticia James, public advocate for the City of New York, Piper Kerman, author of Orange is the New Black: My Year in Women’s Prison, and journalist Tai Beauchamp.

With conversations ranging from the definition of feminism, to gender equality in the workplace and the use of the word bossy, to social media bullying and the prevalence of sexual assault on young women, the midday event had attendees of all ages in for a day of inspiration, motivation and enlightenment.

“If we build them as strong young women, they will be strong women who can help change the game for all women going forward,â€ says YWCA-NYC CEO Dr. Danielle Moss Lee on the importance of having conversations such as these with teens.

To keep the conversation going about female empowerment, racism and other issues affecting 21st century young girls follow @YWCANYC on twitter and visit their website at ywcanyc.org.