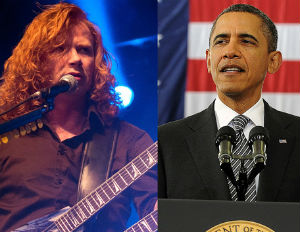 The list of entertainers who aren’t fans ofÂ  President Obama continues to grow.

At a recent concert in Singapore, Megadeth singer Dave Mustaine slammed the president accusing him of staging the Aurora and Sikh Temple shootings for political gain.

“Back in my country, my president,” Mustaine begins and then pretends to gag himself with his finger, “is trying to pass a gun ban so he’s staging all of these murders. The ‘Fast and Furious’ thing down at the border. And Aurora, Colorado, all the people that were killed there. And now, the beautiful people at the Sikh temple.”

Mustaine went on to say, “I don’t know where I’m going to live if America keeps going the way it’s going because it looks like it’s turning into Nazi America.”