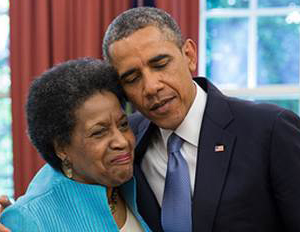 Myrlie Evers-Williams is determined to bring prominence to the civil rights contributions of her late husband, Medgar Evers.

This week, Evers-Williams will hold events to remember her husband’s work as the first Mississippi field secretary of the National Association for the Advancement of Colored People, the Associated Press reports.

Those events include a black-tie gala and educational programming at colleges in the area.

“We are cursed as human beings with this element that’s called hatred, prejudice and racism,” Evers-Williams, 80, told the AP. “But it is my belief that, as it was Medgar’s, that there is something good and decent in each and every one of us, and we have to call on that, and we have to find a way to work together.”

Evers-Williams, who delivered the invocation at President Obama’s inauguration in January, met again with the president last week at the White House. A ceremony of remembrance was held June 6 at Evers’ gravesite in Arlington National Cemetery and attended by former President Bill Clinton and Attorney General Eric Holder.

Evers was 37 when he was assassinated on June 12, 1963. But his legacy has often been overshadowed by his civil rights peers Dr. Martin Luther King, Jr. and Malcolm X.