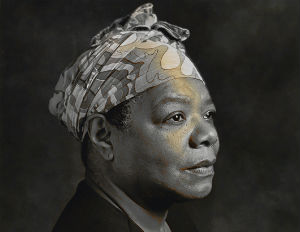 On September 15, 2015, the Art Collection of renowned Author and Poet Maya Angelou will go up for auction at the Swann Auction Galleries’ in New York City. The African American fine art department will offer works from Dr. Angelou’s private collection—much of which has never been publicly exhibited.

According to Swann Galleries, many of the nearly 50 pieces of art were inspired by and gifted to Dr. Angelou, such as the vivid story quilt by Faith Ringgold, which was commissioned by Oprah Winfrey for the author’s 60th birthday. In an interview with the Observer, Alexandra Nelson, Swann Auction Galleries’ communications director,Â saidÂ Angelou’s collection Â included some very significant pieces. “Dr. Angelou had a real interest in African culture, and her collection reflects that,â€ Ms. Nelson said. “We’re the only auction house that focuses on this area so intensely. Because we have regular auctions, and because Dr. Angelou’s collection was of African American fine art it, was the right fit.â€

Maya Angelou’s Quilt of LifeÂ is expected to set a new auction record with a pre-sale estimated of $150,000 to $250,000. Nigel Freeman, director of the African American fine art department at Swann, told theÂ ObserverÂ the piece was very special to Dr. Angelou, who hung it in her Harlem home. “It encapsulates Dr. Angelou’s interest in art that’s a narrative about representations of women–often strong women like herself–and the artist,” said Mr. Freeman.

Additional highlights from the collection includeÂ a painting by John Biggers, entitled Kumasi Market, an oil and acrylic on masonite board painted in 1962, which depicts both Biggers’ and Dr. Angelou’s interest in African culture. Check out a few of the other works of art up for auction.

For additional information on the auction, or the works seen here, contact Swann’s African American fine art department. The exhibition will be open to the public on September 8.

Feature: When Going Back to School Makes ‘Cents’