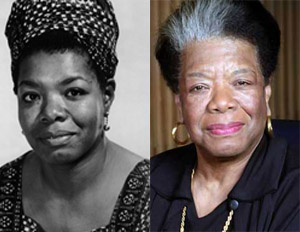 On my very stressful NYC commute this morning, I was both saddened and surprised to find out via Instagram that one of the most prolific, game-changing poets, Maya Angelou, has passed away. I knew there were reports of illlness, but for me, Maya Angelou was like a second grandmother who I couldn’t fathom being without.

Though it’s upsetting that she is no longer with us, she has left behind a legacy of boss moves that have inspired, motivated and pushed generations of young black girls to not only go beyond the world’s limitations of them, but to feel fabulously good doing it.

Here are 10 boss moves of a cultural legend that continue to change minds and notions, and push boundaries that should inspire us all to continue to rise:

1. As a teen, she became the first black female streetcar conductor in San Francisco. During World War II, she was a student at both George Washington High School and California Labor School, where she studied dance and drama on a scholarship.

2. She danced with the legendary Alvin Ailey in his early days, forming a team with him. She also didn’t care about the cultural taboos of the day, (nor the illegality of it in many U.S. states at the time), marrying a Greek electrician and budding musician in 1951.

3. She was an early pioneer in the calypso dance and music movement in the 1950s and 1960s. She danced and sang calypso professionally in clubs around San Francisco, and would eventually go on to tour in Europe with a production of the opera Porgy and Bess. In 1957, she recorded her first album, Miss Calypso, which was reissued as a CD in 1996. She also appeared in an off-Broadway review that inspired the film Calypso Heat Wave, in which Angelou sang and performed her own compositions.Â

4. She got her early writing start among Harlem’s who’s who in literature and the arts. In the late ’50s, she joined the Harlem Writers Guild, where she met major African-American authors, including John Henrik Clarke, Rosa Guy, and Julian Mayfield. Her works were also published for the first time during this period. In 1961, she performed in Jean Genet’s The Blacks, along with with black film and Broadway pioneers Abbey Lincoln, Roscoe Lee Brown, James Earl Jones, Louis Gossett, Godfrey Cambridge and Cicely Tyson.

5. In 1960, she got involved in the Civil Rights Movement as well as equal rights activism, having met both Martin Luther King Jr. and Malcom X. She served as SCLC’s northern coordinator, as well as helped Malcolm X build a new civil rights organization, the Organization of Afro-American Unity before his assassination. King would be assassinated on her 40th birthday, but she still held the torch and continued working toward equality. After his death, she wrote, produced, and narrated “Blacks, Blues, Black!” a ten-part series of documentaries about the connection between blues music and black Americans’ African heritage for National Educational Television, the precursor of PBS. She served on two presidential committees, one for Gerald Ford in 1975 and for Jimmy Carter in 1977. She would be honored by President Barack Obama in 2010 with the Presidential Medal of Freedom for her works in the Civil Rights movement, as well as literary contributions to culture and society.

6. She was an early afropolitan woman, having traveled and been actively involved in communities in Africa. She and her son, Guy, lived in Cairo in the early ’60s, and Angelou worked as an associate editor at the weekly English-language newspaper The Arab Observer. She also lived in Accra, Ghana where she became an administrator at the University of Ghana, was a freelance writer for the Ghanaian Times, wrote and broadcast for Radio Ghana, and worked and performed for Ghana’s National Theatre. Sge also served as a feature editor for The African Review, and performed in a revival of The Blacks in Geneva and Berlin.

7. She was a woman with no holds barred about her past and how she overcame sexual abuse, racism and poverty as a black woman and single mother. Her seven biographies detailing and examining these issues, along with several books of essays and poetry, would not only serve as inspiration for women but as the catalyst for changes in cultural perceptions and norms. Published in 1969, her first autobiography, I Know Why the Caged Bird Sings, is her most prevalent and brought her international recognition and acclaim. The book won numerous awards including the National Book Award and remained a staple on The New York Times bestsellers list. Her first collection of poems, Just Give Me a Cool Drink of Water ‘Fore I Diiie, received a Pulitzer Prize nomination in 1972, and she was chosen by President Bill Clinton to recite her poem “On the Pulse of Morning” during his inauguration in 1993, a recital that was broadcast all over the world.

8. She was smart about being a multifaceted entertainment and literary brand before the concept was the common component of career longevity it is today. Her extensive acting career includes roles in plays, films, and on TV, including her appearance in the television mini-series Roots in 1977. Her screenplay, Georgia, Georgia was completed in 1972 and was the first original script by a black woman to be produced. Angelou, along with Leonora Thuna, wrote the screenplay for the made-for-TV film version of I Know Why the Caged Bird Sings, which aired in 1979 on CBS.

9. She understood that boss moves shouldn’t decrease as age increases. In 1998, well into her 70s, she became the first African American woman to direct a major motion picture, Down in the Delta. Since the 1990s, she actively participated in the lecture circuit; appeared on shows including The Oprah Winfrey Show; honored with the Presidential Medal of Arts in 2000; the Lincoln Medal in 2008; and has received Grammy awards for her spoken word albums in the late 90s’ and early 2000s. She’s also received more than 30 honorary degrees and served as Reynolds Professor of American Studies at Wake Forest University. She was also on her 32nd book, late last year, and said at the time, “I’m working on a book that’s asking me to be better than I’ve ever been,â€ Angelou said. “It’s asking me to write better than I’ve ever written, so I’m working at it.â€ But when asked about the book’s subject, there was that laugh again. â€ I don’t think so–not yet.â€

10. Even as a senior icon, she saw the value of young people and was committed to educating, unifying and uplifting them. Her work, “Pledge Youth Poem,” encourages today’s generations to take the torch of freedom and advancement and run with it. Her legacy has spawned schools and youth advocacy foundations in her namesake across the globe. For Black History Month in 2013, Angelou helmed a project called “Telling Our Stories,” which featured black leaders in music, politics and entertainment including Kofi Annan, Jennifer Hudson, and Alicia Keys, and sought to give a narrative to today’s generation. “Too many young black men and women don’t know that they’ve already been paid for, don’t know some of the great men and women who have lived in this world and paid for them already,â€ she explained. “It’s important for young black men and women. I think it’s imperative for young white men and women. You see, only equals make friends. Any other relationship is out-of-order.â€ How has Maya Angelou inspired your boss moves?