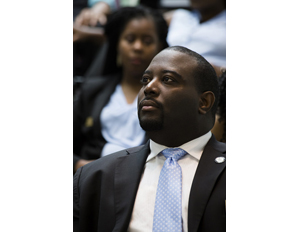 Experiencing life as a “black man without a college degree,” for almost a decade, was enough to make Matthew Nelson finally go back to school to complete his degree in engineering.

Traditionally, the NSBE chair is an engineering student in their 20s. Nelson is 31 and a unique case as he just received his B.S.E. in industrial and operations engineering (IOE) from the University of Michigan, last year.

Accepted into the University’s engineering school in 2002, Nelson dropped out, maintaining a below-average GPA.

“I didn’t know what I wanted to do,” says Nelson. “I considered the military, but I became an open-road trucker.” He did that for a year and then his wife was offered a work opportunity in London.

The couple moved overseas for over a year. Nelson worked as an American collegiate football coach and as a DJ.

However, he always wanted to go back to finish his engineering degree.

Returning to the United States, he enrolled at Lansing Community College, earning a place in the Phi Theta Kappa Honors Society in 2011.

That gave him the impetus to complete his engineering degree at the University of Michigan. Nelson feels maturity definitely helped him finish.

Nelson made the dean’s list, earned the College of Engineering Distinguished Leadership Award, and was awarded the first-ever CEDO Legacy Award for his work in engineering diversity.

In addition to being elected the NSBE’s national chair, he has held various positions as part of NSBE. He has helped it raise more than $250,000 in corporate and academic support, and led an effort to raise $3.3 million.

Currently, Nelson is developing a web platform, STEMLifestyle.com, to display theÂ lifestyles of engineers, researchers, and scientists. He returns to U-M in the fall for his master’s degree in design science.

He is also committed to encouraging others to realize any discarded dreams of obtaining a degree in the STEM disciplines.

“I want to be an inspiration to others to complete their education,” he says.

Donâ€™t Talk With Your Mouth Fullâ€”but Do Talk!