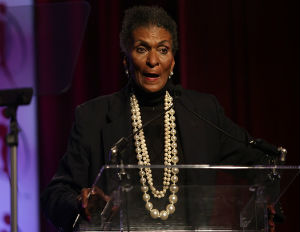 Marva Collins, the legendary Chicago teacher who saw limitless potential where others saw only limits, died on Wednesday, June 24, in South Carolina at the age of 78.

Collins became a national hero when, after opening a private school, Westside Preparatory, in 1975, her low-income African American students–many of whom had been written off as learning disabled or uneducable–began to excel. Starting with four youngsters, including her own daughter, Collins set high academic standards and exposed her charges to classic literature, the Socratic method, and math; she was also a nurturing and affirming presence in the classroom.

In a 1980 60 Minutes story on Collins and her methods, fourth-graders from Westside Prep said their favorite authors were Shakespeare, Chaucer, and the Greek myths, as well as Booker T. Washington and Charlotte Bronte. When 60 Minutes revisited Westside 15 years later, the students seen in the original program were all working or in college or law school–none were dead, in prison, or on welfare, though that had been the fate of many of their peers who had not attended Collins’s school.

For her extraordinary achievements, Collins was awarded the National Humanities Medal in 2004. In 2013, she received the inaugural Barbara Graves Legacy Award at the Black Enterprise Women of Power Summit.

Collins was convinced that every child is teachable: If they can memorize rap lyrics, why not Chaucer? Why not the multiplication tables? This exceptional woman who taught kindergarteners what a quadrilateral is (a shape with four sides and four angles) and the meaning of sagacious, all while urging children to speak up and telling them they’re brilliant, never sought fame or renown for herself. All she wanted, she told a South Carolina newspaper in 2007, was “to be able to say I got an A-plus in the assignment God gave me.â€