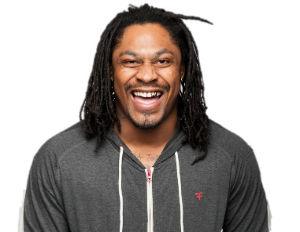 Seattle Seahawks running back Marshawn Lynch is endeared in the hearts of many for his on the field dominance, and his off the court antics – but this fall, “Beast Modeâ€ goes digital.

“I think the whole aspect of the game is Beast Mode,” Lynch says in a cover story interview, which will be featured in ESPN The Magazine’s first ever ‘eSports‘ issue, debuting at newsstands this Friday.

[Related: Can a Video Game Teach Your Preschooler to Solve for X?]

For Lynch, the five-time Pro Bowler, and Super Bowl champion – this experience is one that can’t be replicated. The self-described ‘gaming enthusiast’ is the first athlete to appear in the mega popular ‘Call of Duty’ series. Partnering with a franchise that’s sold over 175 million copies, that’s a great look for Lynch, and as the announcement comes right on the heels of the news that Spike Lee would be behind the scenes for NBA 2k16 – it seems like the video gaming industry is apt to continue it’s expansion into previously uncharted territory.

“I’ve been in the Super Bowl, movies, music videos, Madden. But to have your own character in Duty is, I mean, it’s almost like you arrivedâ€, Lynch says while in Santa Monica, CA. He’s there to test the game, after recently completing the ‘motion capture’ necessary to add his physical likeness to the game.

Published by Activision, ‘Call of Duty: Black Ops III’ for those not in the know, is a first-person shooter, war simulation game. The latest in a series popular for it’s attention to detail, and dogfight recreations – this game takes on the future of war, and gaming. In the opening lines of the interview, the scene is set for Lynch’s introduction to gamers – ‘In the year 2065, cybernetic advancements give rise to augmented human soldiers, a new breed of badass charged with preserving our way of life. Their mission leads them to a seedy bar in Singapore, where they encounter an underworld boss and his elite squad of mercenaries. Among them is a 5-foot-11, 215-pound battering ram of a man who’s exactly like the world’s most ferocious running back circa 2015: the Seahawks’ Marshawn Lynch.’

Perhaps as excited as Lynch for the opportunity, is Eric Hirshberg – the CEO of Activision, saying “Marshawn Lynch is the perfect match for Call of Duty… I mean, he’s a guy who fills stadiums, crushes competitors and has a Beast Mode. What could be more COD than that?”

Look for ‘Beast Mode’ making his digital debut in ‘Call of Duty: Black Ops III’ – which is scheduled to be released this November.

How to Maximize Your GI Bill Housing Allowance