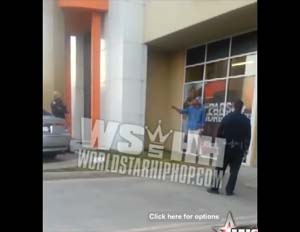 Check out this video!

A man recording from his cellphone caught two policemen in a shootout with an unnamed man.

The man surrounded by police screams that he’s “ready to die” and says “tell my kids I love them.”

According to the description on the video, the man had a public altercation with his children’s mother. The police were apparently trying to subdue the man. As seen in the video he tells them to shoot him and close to the end you see him pull a gun and shots ring out.

View the video at here