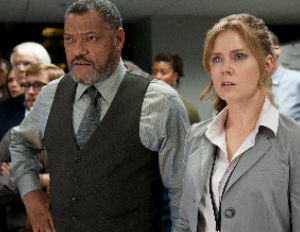 Warner Bros. is turning heads this summer as they gear up to release another surefire Blockbuster hit! With 42, The Hangover Part III and Gatsby already under their belt, it’s guaranteed that the 2013 remake of the epic Superman tale will live up to movie goers’ expectations when they go to the theaters next Friday (June 14) for the release of Man of Steel.

In this action adventure flick, starring Laurence Fishburne, Kevin Costner, Amy Adams, Christopher Meloni, Henry Cavill and Russell Crowe, a young Clark Kent “learns that he has extraordinary powers, and is not of this Earth. As a young man, he journeys to discover where he came from and what he was sent here to do. But the hero in him must emerge if he is to save the world from annihilation and become the symbol of hope for all mankind.â€

The story of Superman is a classic, so to help comic fans and adventure lovers celebrate the latest Clark Kent film, BlackEnterprise.com is giving you a chance to see the film on us, and win a number of prizes to go along with a pair of tickets.

Starting today, we want you to watch the Man of Steel trailer below and tell us what Kevin Costner, who plays young Clark Kent’s father, says to him when saying he is the answer…the answer to what? You can tweet in your answers to @BlackEnterprise and include the hashtag #ManofSteel. The grand prize winner will receive a pair of movie passes, poster water bottle, men’s T-shirt, ladies tank top, magnet, keychain and hat. We will also choose a runner-up who will receive a pair of movie passes.

The winners will be chosen next Thursday (June 13). Good luck!

Torn Between Two Loves: How to Find Time For Love as an Entrepreneur