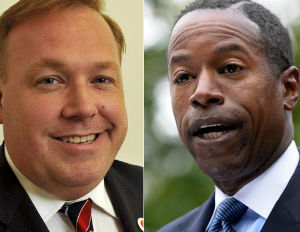 FBI agents took State Senator Smith and City Councilman Halloran into custody at their homes around 6 a.m. Halloran told a reporter he “had no idea” why he was being arrested, according to the New York Post.

“I’m sure the truth will come out once I have an opportunity to find out what’s going on,â€ Halloran said.

The duo allegedly formed an alliance to place Smith, a Democrat from Queens, onto the Republican mayoral ballot by soliciting GOP leaders through bribes.Â Smith needed the support of three boroughs to get the Republican nod without having to change party affiliation. Hollaran is also being accused of taking bribes from a consultant in exchange for $80,000 in City Council funding.