A Tale of Two Cities: The Creation of Majority-Black Cities and Their Economic Potential 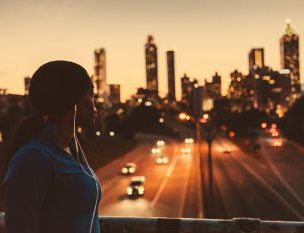 Atlanta as the “Capital”

If you are familiar with Georgia, you have probably heard of cities outside of Atlanta. Georgia is home to the cities of Decatur, Savannah, Columbus, and more.  In fact, Savannah is one of the top cities in the U.S. for black population, according to the 2010 census. However, Atlanta is referred to as the “capital of black America.”

Now, you may assume that the creation of cities is not a very interesting subject, but I will tell you that there was much debate around whether these two cities should exist. Why? It’s complicated, and there are a number of factors. Politics is not a very linear nor a logical process most times. However, there were many who thought the creation of these cities were necessary for the economic growth of its black citizens.

For some, there was concern that these majority-white cities were popping up over metro Atlanta. It was viewed that these citizens were taking control to drive their own economic prosperity and destiny. Hence, the conclusion became that black people needed their own cities in order to thrive–enter the proposals for the City of South Fulton and the City of Stonecrest in 2016.

A Tale of Two Cities

Both the cities of South Fulton and Stonecrest were authorized for a referendum in 2016.  I was a co-sponsor on the city of Stonecrest legislation. The city covers a small portion of my legislative district.

The creation of these new two majority-black cities caused me to wonder, are cities a way to foster economic justice for its majority-black inhabitants? “Possibly, we can look to our historical past to determine the benefits of majority-black cities, townships, and communities. During the 100-year period from Reconstruction to the passing of the Voting Rights Act of 1965, African Americans’ economic power allowed for the creation of various black-owned institutions: religious, academic, financial, recreational, media, and cultural institutions. These institutions gave African Americans greater autonomy in spite of Jim Crow segregation. While these institutions waned as our society became more integrated, the annexation of majority-black cities could lead to a renaissance of new black institutions, resulting in African Americans acquiring greater economic and political strength than that of our ancestors.”

When I first started writing on this topic, there were a lot of suggestions about what this piece should encompass. Georgia’s largest majority-black city is, of course, Atlanta. I am at a little bit of a disadvantage in writing about cities, because, unfortunately, I have not lived long enough to have a perspective in the cityhood movement.However, there is much debate about the role of cities, in general. “Overall, the ability to make local zoning and land use decision helps the economy. These zoning decisions also prompts the creation of some new cities.

Cities make many quality-of-life decisions, including the planning and implementation of parks, trails, and amenities for all residents. This creates places where people want to live and play, and where companies want to locate–in turn driving the economy,” says Kelli Bennett, a communications and marketing associate with the Georgia Municipal Association.

But, do they create an additional level of bureaucracy and taxes, or are they really a vehicle for economic empowerment for communities to drive their own economic destiny? If the latter is true, what are the economics reasons to create majority-black cities?

This article asks many players involved in the creation of these two cities the question, “What were the economic reasons for proposing or supporting a majority-black city?”

I think you will be surprised by many answers. Additionally, this should give you food for thought in your respective states about any cityhood movements.

Rep. Roger Bruce, Sponsor of the City of South Fulton:

“Economic justice was a consequence of the creation of the city of South Fulton.  I wanted to create a ‘home,’ just like the communities in New York.  The surrounding communities and interests were swallowing what was left of the community. Additionally, residents didn’t feel they were getting the services they needed, and schools were in danger of being folded into surrounding school systems. Essentially, the city of South Fulton had to be formed in order for communities to stay together.”

Joel Thibodeaux, Chair of the Governor’s Commission on the City of Stonecrest:

“Following years of stagnation, many in the Stonecrest community came to the conclusion that we could no longer allow the priorities of others to dictate what our opportunities for recovery and success should be. We shared the knowledge and understanding that self-determination has historically translated to growth and prosperity for black communities, and that Stonecrest has the people, tools, and resources to undertake that endeavor and be successful. The establishment of Stonecrest is allowing us to adopt proven standards for governance, our own set of civic priorities, and a plan for developing our community’s assets in a way that improves the quality of life for our citizens, and will make us competitive with any city in the region.”

LaDawn Blackett-Jones, Co-Sponsor of the City of South Fulton: “From a city governance point of view, these cities will be like all other Georgia cities.  However, for the children of the community, it is a strong statement that declares, ‘We are as good and as capable as anyone else.’  That empowerment is reinforced when children can identify with the government leaders, business leaders, and community leaders who are doing well.  Unfortunately, there are still places in our country where people are prohibited from participating, due to their race.  It is my hope that these new cities will open the door to businesses that otherwise would not get an opportunity to participate.”

Jason Lary, Organizer for the City of Stonecrest

“Economic development is the cornerstone of our cityhood platform. We completely believe the ‘road to salvation’ is through the diverse commerce of the industrial park as well as commercial and tourism revenue. We have built this city on the promise of becoming a destination location for visitors, a strong working class tenancy of the residents, and executive level participation of corporations–that’s our future.”

At the time of this publication, both cities had elected their new leadership. It will be interesting to compare the census data of median income before and after these cities formed. Until then, the leadership of both cities have an opportunity to service the needs of their constituents. This is especially true when it comes to economic empowerment for its majority-black inhabitants. Let’s hope every city strives to improve the life of each of its citizens. Dar’shun Kendrick is a  private securities attorney and owner of Kendrick Law Practice, helping businesses raise capital the LEGAL way. She has two B.A.s from Oglethorpe University, a law degree from the University of Georgia, an M.B.A. from Kennesaw State University, and works with “for profit” companies seeking to raise $250,000 or more through private capital. Additionally, she’s been elected to the Georgia House of Representatives, representing East DeKalb and South Gwinnett counties since 2011. She serves on the committees of Juvenile Justice, Interstate Cooperation, Judiciary Non-Civil, and as the ranking Democrat on the Small Business and Job Creation Committee. She’s also co-chair of the Georgia Legislative Black Caucus Economic Development Committee; a board member of the Technology Association of Georgia’s (TAG) corporate development board; and the founder and board chair of the nonprofit, Minority Access to Capital, Inc. Its mission is to educate and empower minorities about how to grow their companies and create generational wealth.