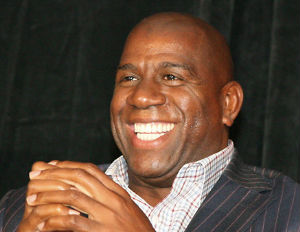 ESPN is one of a few media outlets reporting that Magic Johnson is expected to be named one of the owners of the Los Angeles Sparks, the WNBA franchise once owned by Paula Madison.

An announcement is expected Monday morning. Johnson will be part of an ownership team that includes Mark Walter, a founder and the chief executive officer of Guggenheim Partners. Mr. Walter is also the Los Angeles Dodgers’ controlling owner.

Late last year, Ms. Madison, the media conglomerate, informed the league that her family could no longer endure losses — it had apparently lost nearly $12 million.

Since taking over the franchise in 2007, Madison said, she and her family had lost $12 million – including $1.4 million this past season.

While half the league’s teams are connected to NBA franchises, the Sparks were independently owned, which has made reaching profitability more difficult. From arena costs to separate front office staffs and office space, a lot more money is spent by independent owners. It didn’t help that the Sparks’ major sponsorship deal with Farmers Insurance ended this past year.

As the team — which is a perennial league leader in attendance — struggled to make money, rumors swirled that a new owner could move the team. Franchises like Golden State were said to be in talks to acquire the Sparks, even as the team angled to build a new stadium in San Fransisco.

Mr. Johnson had made no mention of the news on his very active Twitter account as of Tuesday night.

ESPN.com’s Ramona Shelburne was first to report the story. Via her report:

After Madison’s announcement, the league took control of the Sparks and actively sought to find new buyers. The Golden State Warriors confirmed to ESPNW’s Michelle Smith that they were interested in buying the Sparks and moving them to the Bay Area, which has a strong women’s basketball fan base because of the success of Stanford and California’s women’s programs.

The Sparks and the WNBA have been in limbo ever since. It’s been impossible to schedule next season without knowing the fate of the Sparks. Free agency has been stalled. Talks on a new collective bargaining agreement have been slowed.

Now that Johnson and Walter have stepped in to buy the franchise, all that can move forward and one of the WNBA’s signature franchises can remain in Los Angeles.

It is the second time the duo has partnered to help resurrect an L.A. franchise. Johnson and Walter teamed with a group of investors to buy the Dodgers from embattled owner Frank McCourt in 2012 for a record $2.15 billion dollars. Walter is the chairman of the Dodgers and Guggenheim Baseball Management, and CEO of Guggenheim Partners, a privately held global financial services firm that manages more than $200 billion in assets.

A press conference was set for 10 a.m. Wednesday.

Why Small Companies Can Compete Against Big Corporations