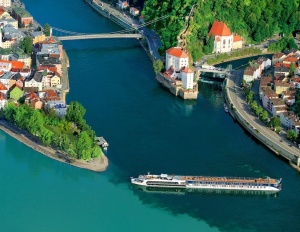 The AmaViola on an Adventures by Disney Danube River Sailing

Backpacking through Europe is on almost every travel bucket list, as iconic a dream for those of us with wanderlust as the classic American road trip of driving cross-country. But the new trend of cruising through Europe is letting visitors immerse themselves in the magic of the continent while enjoying the creature comforts of a luxury vacation.

Sailings down the Rhine, Danube, RhÃ´ne, Seine, and other rivers can take you through France, Germany, Austria, Switzerland, and more, past centuries of history, picturesque countrysides, and right into the heart of stunning cities such as Budapest, which sits on either side of the Danube River.

A number of cruise lines are catering to discerning travelers cruising through Europe with specially designed ships (panoramic windows and viewing decks) for these all-inclusive sailings, offering onboard perks from Wi-Fi to butler service.

If you’ve been on an ocean voyage before, you might think you’ve got cruising down pat. But river cruise ships are much smaller and therefore more intimate. It’s one of the factors that can really up the luxe factor–spend a week sailing with an attentive crew and less than 200 other passengers and you will feel catered to.

And forget about days at sea. With a river cruise, there are stops each day in a new destination and a full slate of sightseeing tours planned for you–usually included in your fare.

Adventures by Disney’s Danube River cruise, one of its exclusive sailings with AmaWaterways, starts in Munich or Prague and winds its way through cities such as Salzburg, Vienna, and Bratislava. There are daily walking or motorcoach tours–all led by knowledgeable and well-traveled Adventure Guides–plus activities ranging from wine tastings and classical concerts to marionette shows and family hikes through medieval ruins.

The European river cruising season typically lasts from April to October, according to Cruise Critic, with special Christmas and New Year’s sailings. Most itineraries last a week, and tour three countries.

Adventures by Disney has announced new experiences for 2018, including an adults-only epicurean Rhine sailing and a similarly grown-up Oktoberfest Danube sailing. Of course, there’s something for families as well, with a new Beauty and the Beast-themed voyage down the Rhine. With endless options, there’s a European river cruise for every type of traveler.