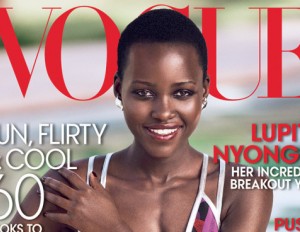 The magazine covers keep coming in for Lupita Nyong’o. According to The Huffington Post, the actress is on the July cover of Vogue magazine.

Nyong’o discusses her new found fame and recent paparazzi adventures. “It just feels like the entertainment industry exploded into my life,” she tells Vogue. “People who seemed so distant all of a sudden were right in front of me and recognizing me — before I recognized them!”

The spread was photographed by Mikael Jansson in the city of Marrakech, Morocco.

Nyong’o also explains that although her red carpet appearances are glamorous, it’s just “one aspect” of who she is. “It doesn’t represent the entirety of me, which I am at peace with,” she says.