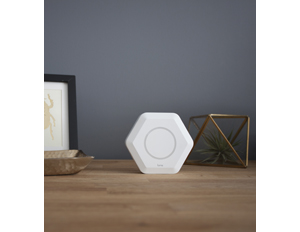 WiFi routers–just about everyone has one, but we don’t know a lot about them or who makes them. One fact is clear; the consumer networking product space is dominated by white and Asian guys–which is why Luma is blowing my mind.

The largest, most prolific consumer router companies are Linksys, Netgear, and D-Link. Linksys and Netgear are American companies, and D-Link is a Chinese business with headquarters in Taiwan. The CEO of Linksys, whom I’ve had the pleasure of meeting, is Chet Pipkin, a white dude and a completely likable fellow. Netgear’s CEO is Patrick Lo and the head of D-Link is Roger Kao–both of Asian descent.Â Router parts are made overseas, mostly in China.

I’ve covered the networking product space reviewing routers, range extenders, wireless adapters, and other such products for almost a decade. There have been several startups of late, promising to fix the woes of WiFi coverage that plague many. The biggest complaint is dead areas–routers that don’t transmit a strong enough WiFi signal to cover an entire home or office space.Â Eero is one such startup promising whole-home coverage.

Now we have Luma, a WiFi solution that employs three identical routers. These routers sync together to create what is known as a “mesh networkâ€–think of it as a blanket of WiFi that covers an entire area in wireless connectivity.

I am always impressed with startups that dabble in hardware. The costs of manufacturing, not to mention research and development, makes a hardware-focused startup more challenging than launching a business that creates a software or service solution.

Luma was created by Dr. Paul Judge and Mike Van Bruinisse. Both are networking experts that have worked together for almost two decades. But get this–Dr. Paul Judge, CEO and co-founder of Luma, also just happens to be a black man. Judge is a serial entrepreneur, investor, scholar, and all-around bad ass. He holds a B.S. in Computer Science from Morehouse College and received his Ph.D. and M.S. in Network Security from Georgia Tech.

I have yet to test Luma, but I am expecting a review unit any day now. However, it looks promising. As a person obsessed with computer networking since the 90s and as a black person, I am absolutely intrigued with Dr. Judge’s Luma, and its vision for whole-home WiFi. I can’t wait to get my hands on the product.

The Secret To Lifelong Fitness Goals Is…

Are You Tired of Undersaving?