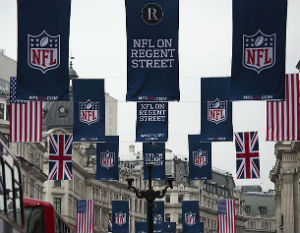 The NFL will next year play a total of three regular season games at London's Wembley Stadium. It feted London's famed Regent Street with a NFL-style block party last month.

It’s official: The NFL in London is a real, full-fledged thing.

A crowd of 83,518 filled Wembley Stadium to watch the Minnesota Vikings’ 34-27 win over the Pittsburgh Steelers in London on September 29. Over a half-million people attending the NFL’s version of its own block party, held on London’s infamous Regent Street, “enjoying football-themed games and attractions, including visits from Vikings’ and Steelers’ players and coaches.”

“Our fans in the UK have continued to demonstrate that they love football and want more,” NFL commissioner Roger Goodell said in a statement. “Both of this year’s games in London sold out quickly. The fan enthusiasm for our sport continues to grow. By playing two games in the UK this year, we are creating more fans. We hope that with three games in London next year we will attract even more people to our game.”

We talked to Gordon Innes, the CEO of London & Partners, the city’s public-private agency which helps drive new business, and promote the city of London as a major destination for travel, tourism and prime location in which to do business. Before London & Partners, Innes worked for the Department for Business Innovation and Skills. While there, he led the team which oversees the UK’s transition to a green economy and the creation of a Green Investment Bank.

He talked about the prospect of a London-hosted Super Bowl, the Olympic legacy and the growing popularity of the NBA and NFL across the pond.

I was in London immediately after the Olympics, and people couldn’t have been prouder of how it turned out.

I think it really created a sense of a pride in the city. We’d seen a lot of investment coming into the city before the games, build outs of whole new parts of the city, new infrastructure, [improved] transportation. That investment created a lot of opportunities for companies and is continuing to do so.

Everyone was nervous in the run up to the Games. There was a sense of nervousness about whether we could pull it off, if it was going to be this great success. It was really that first week that people realized that we had done what we set out to do. Not only were our athletes doing a phenomenal job, but also the organization and transport worked fantastically. The spirit in the city was amazing; we had 80,000 volunteers around the city providing this great welcome to everyone. People were looking at their own city in a way they’d never done before, being so proud to be part of the experience and wanting to build a legacy off the back of that momentum. So we’re seeing people now engaged in sports, volunteering and some of the top sponsors are continuing to be engaged in the growth of the city, particularly with meetings, sporting and business events. The industry showcased what it was able to do. People are saying, ‘Wow, if they can deliver that fantastic showpiece last summer, imagine what they can do going forward.’

We’re doing a lot to take some of our businesses out to the Middle East, to Rio and other parts of the world to let them know that we can help stage their event. Our supply chain we used to deliver the games can help you put on the World Cup, can help you with the Olympics, or cultural events. It was a fantastic showcase for the city.

What was the legacy of the impact of the Games itself on small businesses?

We created something called the compete forward platform, which was part of the London Business Network. So what that did was pull into [small businesses] from across the city and it put them onto a digital platform that allowed them to link up with potential partners to help them deliver on different aspects of the Games. We had thousands of businesses assist on things like stadium seating or the lights or some of the event management activity like hospitality. That was a fantastic opportunity to engage those businesses, to give them the experience to play in the big leagues with some of the bigger companies. We’re using that platform for procurement going forward. It’s an objective of ours for 25 percent of procurement to go to small and medium-size businesses. We’ve done a lot to showcase what a lot of those businesses contributed. I’ve taken a series of small businesses that won contracts last year to India to look and see what they could do around development and infrastructure there.

We also worked very closely with the top Olympic sponsors, like Westfield, which built a huge shopping mall in London. With the Olympics you’ve got to work within a deadline to make things happen, which brings everyone together to work in a much more effective way than we normally do. So, we all work much better with city operations, planning department, and transportation. We know each other better now and can help businesses be a part of that.

What are the plans for the utility of the facilities, and a place like Olympic Park, which was by all accounts in a little-used part of the city before?

The original bid that London won was focused on the regeneration of the East London area. It was about bringing the median income in that part of the city up with the rest of the city, and bringing back areas of the city that needed to be brought back with economic growth. It was also built in with the idea of legacy right from the outset. So the concept around the park was getting rid of an old waste site, putting a lot high voltage power lines underground, cleaning up the rivers and canal base in that area — changing some of that and putting new infrastructure into it, especially new public transportation. Now Stratford International is the best connected train station in Europe, and that’s off the back of the Games. Six-and-a-half billion pounds (roughly $10.3 billion) of investment went into the network. It’s very close to central London, only two or three stops away from the Canary Wharf Financial District.

But a lot of thought went into what was wanted for the park to grow into. There’s a big business center being built near Stratford. There’s 7,000 homes going into the park. The venues that were not going to be used were dismantled after the Games and in some cases they were exported and shipped off to other countries. The eight permanent venues all have prospects for use from the private sector. Some of them will be used for sporting events, the main stadium for football and athletics. The velodrome has professional use but for local use, and the same goes for the Aquatics Center.

The multi-use arenas are going to be used for new venues, for Congress meetings as well as sports. The press and broadcast center is set to become a new technology hub. So no white elephants.

I wanted to ask about the NBA, too. They played two games last year. I talked to a sportswriter there and he said that basketball isn’t that popular a sport, but people gravitate to the stars. Could you see a franchise there in the future? And what’s the appetite like there for basketball?

It’s really interesting because they’ve said they’d like to have a permanent franchise. We helped them set up their office over there back in 2007 and helped with the planning of their exhibition games, which they played at O2 arena, which is the most popular concert venue in the world. They’ve also said the next three years they’ll have games during the regular season slated for play in London.

I talked to sportswriters over there who say basketball is not really all that popular. How do you change people’s mind to make something like a successful franchise something that’s feasible?

You’re right, basketball is not a popular local sport in the U.K. but we saw a huge interest in some of the stars who came during the Games. What we do know is that it’s the fastest-growing sport at the moment. The NFL has similar ambitions in terms of a franchise, but we look forward to what the growth of the sport of basketball means for the future. We help run the database of everyone who purchased tickets for the Games. So 5.5 million people across the country are getting emails from us about sporting events and we can use that to help the NBA and NFL grow their fanbase.

When I visit places people know the Queen, maybe the Prime Minister, and David Beckham. The reality is that sporting events is incredibly important for us. We’ve found that sports tourism is the fastest growing segment of the international tourism market. So we want to capture a big share of that which is why we’ve put a lot of work into attracting more and more sporting events because it brings in crowds of people who help our local businesses which brings revenue into the city.

If you told folks years ago that the Super Bowl would be held in New York/New Jersey, they’d probably would have called you crazy. Why not London?

[Laughs] Well, I can’t say much about that other than it would be a great way to animate the city. It’s obviously a great, international event. When it comes on in the U.K. everyone heads to the pubs and watches together. Even if we don’t understand all of the rules.

Speaking of large-scale events, what’s the nature of the economic impact of an event like, say, Wimbledon?

They’re one of our partners and we do a huge amount to promote Wimbledon each year internationally. It is such a popular event, and sells out every year. It brings in a lot of business. Our hospitality industry does extremely well. Businesses use Wimbledon for meetings, events and functions.

A lot of the interest has to do with the success of British players like Andy Murray, who won the Olympics last year. We have skin in the game now, whereas it used to be we just had the best competition in the world, now we’ve got some of the best players participating in it, too. We haven’t had that historically. But Murray is right up there with football players in terms of endorsement deals. That hasn’t always been the case.

How to Get the Best Deals on Fall Shopping