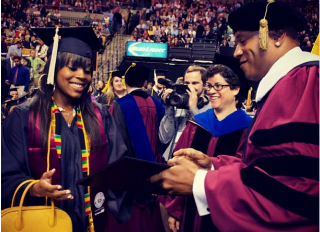 LL Cool J is officially Dr. Cool J as he received an honorary Doctor of Arts degree from Northeastern University on May 2.

The New York-bred entertainer, whose real name is James Todd Smith, received the honorary degree as recognition for his contribution to the art world.

“I’ve been called a few things, but never a doctor, that’s for sure,â€ CBS Boston reports him saying. “For them to recognize my body of work and my contributions to the world of art is an amazing feeling.”

But Mr. Cool J’s honorary degree wasn’t the only accomplishment the Smith family was celebrating. His daughter Italia was the real star of the day. She shared the stage with her dad as an honors graduate of the university.

“It made me feel real proud because I know she put a lot of hard work in, a lot of dedication, a lot of commitment and a lot of hours,” the hip-hop legend said of his daughter’s big day.

Now, instead of one degree to frame, the Smith family has two. Congrats to both on the big accomplishment!

How to Choose a Credit Counseling Agency