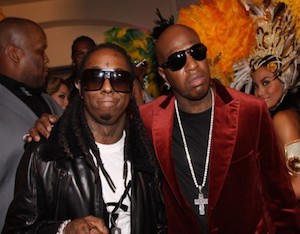 It seems as ifÂ Lil Wayne’s Twitter rants and concert announcement declaring his split from record label Cash Money may be more than talk. Fans were hoping the rapper and his long-time labelÂ would reconcile, butÂ according to Time.com,Â Mr. Carter is going after the label’s pockets for a heftyÂ $51 million.

According to the suit, Lil Wayne claims that Cash Money and label head Birdman are denying him millions of dollars from his upcoming album The Carter V. The “A Milli” rhymer says the label was supposed to pay up an $8 million advance on the album, plus $2 million upon its release.

Lil Wayne wants out of his label contract and $51 million. He’s also asking the judge to grant him “joint copyright holder of all Young Money recordings, currently an imprint of Cash Money, including collaborations with Drake and Niki Minaj,” according to Time.

TMZ reports that the New Orleans native plans to take artists Nicki Minaj, Drake, Lil Twist and his girlfriend Christina Milian when he departs from Cash Money. Though some of the artists worked closely with Birdman, especially Nicki Minaj and Drake, they are signed to Weezy’s Cash Money sub-label, Young Money Entertainment (YME).

The conflict is a shocking one to fans, as Lil Wayne has always publicly revered Birdman as a father figure. The two have been integral in establishing southern hip-hop’s signature sound and credibility.

Check out Weezy’s “I Want Off Cash Money” rants and more details here.