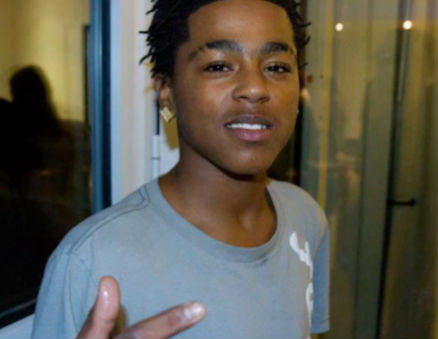 Chicago police are investigating the murder of Chicago rapper Lil JoJo, in what may have been a result of a brewing beef between two local gangs. Another rapper by the name of Chief Keef is at the center of the controversy, as he took to Twitter to address JoJo’s death.

Lil JoJo, whose real name is Joseph Coleman, 18, was gunned down just a block away from where singer Jennifer Hudson was raised, and where her family was brutally murdered back in 2008. Coleman was riding on the back of aÂ  bike with a friend when a car pulled up and opened fire around 7:30 p.m. on Tuesday. Paramedics arrived within ten minutes but the rapper was pronounced dead at the scene.

Hours after the murder, on Chief Keef’s Twitter account, a message was posted saying, “Its Sad Cuz Dat N—- Jojo Wanted To Be Jus Like Us #LMAO.â€ Much of the controversy over the Twitter post focuses on “LMAO,” which is an abbreviation for “laughing my ass off.” After receiving heated responses from his followers, Chief Keef, real name Keith Cozart, tweeted that his account had been hacked. Keef, 17, is signed to Interscope records, which is the label home of 50 Cent, Dr. Dre, Diddy and Eminem.

Investigators believe Keef and Lil JoJo were both a part of the rival gangs in Englewood known as the Gangster Disciples and Black Disciples. Keef reportedly tweeted “#300” which is a known reference to the Black Disciples, said the police. According to reports, the beef between Coleman and Keef stemmed from their music, as Coleman was accused of sounding like Keef.

The beef has become so polarized that Hip-Hop giants 50 Cent and Lupe Fiasco have stepped in the line of fire. After Keef tweeted a threatening message to Fiasco, who is also a native of Chicago, the rapper responded, “I cant go 4 that @ChiefKeef & i cant let the people i love, including you my n—-, go 4 that either. We kings not f—— savages and goons.â€ He continued with what appeared to be departure from the music business, “but my heart is broken and i see no comfort further along this path only more pain. I cannot participate any longer in this… My first true love was literature so i will return to that…lupe fiasco ends here…â€

50 Cent took a more obscure approach tweeting the young rapper, who is also his label mate, “if you still in new York come see me.”