Lessons to Learn From the 'Shark Tank' - Black Enterprise 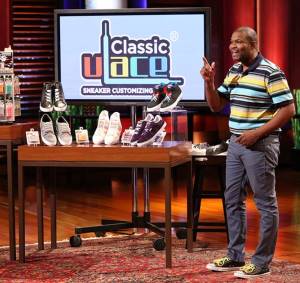 By the time Tim Talley, founder of Rochester, NY-based U-Lace appeared on ABC’s Shark Tank, he was pretty confident. In fact, he’ll tell you that his product was named the Hot New Trend product in Japan. But he wanted distribution in the US and wasn’t happy with the progress his team was making on their own. So when he found out about a casting call for the show, he went for it.

U-Lace sneaker customizing laces are elastic shoelace inserts that enable users to lace multiple colors and patterns into their shoelaces. They can also quickly be removed and inserted, making the customization process easy. “I saw a lot of people reading scripts. I kind of went on the fly,â€ says Talley. “Sixty seconds is a short amount of time. My presentation was really driven a lot by visual. It was driven by me showing them product that was laced up in my product.â€

Talley’s pitch boiled down to this: The average kid in America has about 10 pairs of sneakers, and U-Lace can customize those 10 pairs, turning them into considerably more. “I have this product that gives everyone the opportunity to put their own personality and their own sense of style into their sneakers,â€ recalls Tally. Â “And, literally turn any pair of sneakers into a one of a kind limited edition. We just needed help here at home in the U.S.A.â€

After successfully getting through the casting call in Philadelphia, it was time to pitch the Sharks a few months later. Talley was seeking $200,000 for 25% of the company, knowing that any of the sharks would be a huge asset with his distribution challenges. Sales for the company were just north of $190,000 at the time of the shooting and U-Lace finished 2013 with sales of just under $300,000.

In the end, Talley, who appeared on Season 5, Episode 19 of the show, was able to land a deal with billionaire Mark Cuban. However, the owner of the NBA’s Dallas Mavericks would receive 35% of the company.

Talley’s advice to would-be Shark contestants: First is to be intimately familiar with the numbers — the business side of things. Beyond that, be prepared to show that you can stand out on TV. “It has to be a compelling 60 seconds — very high energy. Driven primarily by showing them what you have,â€ he asserts. “The other strategy is to tell them something really meaningful about yourself. That would make the Sharks potentially like you and a lot less likely to just try to tear into you.â€

For Talley, the experience in the Tank has been a good one. “We just signed a deal with a thousand store chain,â€ he says. “We’re putting a bunch of reps on the road for independent stores. The website has been doing, almost a year’s worth of historical business every month.â€ All told, he sees sales for this year reaching $1.5 to $2 million.