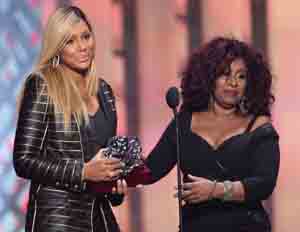 I love a good comeback story. There’s nothing like triumphing over challenges or career lows than coming back stronger than ever. This year’s Soul Train Awards really embodied that, so be inspired.Â  Here are four career lessons on rebounding and comebacks from the star-studded event:

Tamar Braxton’s Triple Win: We all have come to know and love the reality TV star, mother, songwriter and songstress and her story of career pop-off. She took home three awards for the night: Best R&B/Soul Female Artist, Song of the Year for Love & War and the Ashford & Simpson Songwriter’s Award, all while basking in the glory of a hit album and tour. Braxton, who spent many years as a “do wop pop pop” girl behind big sis Toni, endured many road bumps to stardom, with solo projects that flopped in the 90s and early 2000s. She’s even been dropped from or left labels due to unsuccessful attempts at a solo career. Those days are long gone, as the diva now shines at the top, reminding the awards audience, “I want to let you guys know, no matter what you want to be, no matter who you want to be, don’t give up on you.”

Anthony Anderson’s Stellar Star Power: Known for his roles in Barbershop and The Bernie Mac Show, this comic is a veteran in the business having gotten his start in television. But, in 2004, his career stood in jeopardy after he was arrested—and later vindicated—for charges of rape. The charges were dropped, but the tarnish was already there for some fans and industry peers.

Anderson has come back with a bang—dapper and slimmed down—- with a role on HBO’s hit drama Treme and appearances on BET’s The Real Husbands of Hollywood. His hit hosting gig for the Soul Train awards proves you can’t keep a good comic down.

K. Michelle’s Re-brand Reboot: Many people became familiar with soul crooner K. Michelle via her reality TV shake-the-table antics and her story of heartbreak and abuse—two major themes that often overshadowed her talent for songwriting and singing. (Just for the record, I was a fan waaaaay before her reality TV days, so I was always quite shocked that people weren’t familiar with her amazing voice and lyricism before Love & Hip-Hop … But, I digress.)

In an effort to re-focus her brand, she got new management, got a new record deal, cut down on the beefs and violence and turned a new leaf. Her Soul Train award win for Best New Artist proves that with a little damage control and humility, one can always re-route their professional brand and perception.

Old-School Hip-Hop’s Survival Story: Legendary rap artists including Warren G, Vanilla Ice (Yes, he’s legendary), Slick Rick, Doug E Fresh and Big Daddy Kane all took to the stage, and could easily stand firm among today’s top acts. These artists and their music never get old, rocking the crowd like it’s 1989. They prove that one should always push to be authentic, rock with their purpose and skills and never get caught up in age or experience when it comes to advancing and making the next boss move.

What were your favorite moments from the Soul Train Awards? #Soundoff and follow me on Twitter @JPHazelwood.

4 Ways For Your Startup To Save Money On Office Space