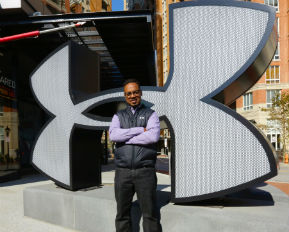 Long before the hard-nosed, energetic executives at Under Armour tapped him to lead the apparel company’s golf brand, Leon Duncan had been groomed for a life with the game.

His godfather and uncle, an entrepreneur named Robert Gilliand, learned the game in the mid-eighties and introduced it to his brother, Edward. “[Mr. Gilliand] realized quickly that golf was a good way to network with people,” Mr. Duncan said of his godfather’s prescience. Before long, between playing football, basketball and baseball, a young Mr. Duncan was sneaking in rounds at Brookwood Country Club, his local track. Every Thanksgiving weekend, the family competes in a golf tournament. Last year marked the first year in over a decade the family hadn’t done the trip; to shake things up, Mr. Duncan and his young family this year roasted a turkey. “For our family, Mr. Duncan says, “golf is the most fierce competition that you can imagine.â€

So after serving as Under Armour’s director of pro sports sponsorship and activation for football, baseball and golf, suddenly this past fall, Mr. Duncan had a choice: He could stay on and help lead the brand’s baseball brand — capitalizing, in addition to robust equipment sales, off the success of Washington Nationals outfielder Bryce Harper — or there was an option to lead a smaller team and expand golf at Under Armour.

The decision was an easy one. Mr. Duncan leads a team of six, and reports to former NFL long snapper Ryan Kuehl, who is the brand’s senior director of professional sports.

For all that has been made of Under Armour’s rapid rise, Mr. Duncan is reverential about the key figures who played a significant role in Under Armour’s growth. In addition to CEO Kevin Plank, whose ascent is folkloric in Baltimore and elsewhere, he singles out Kip Fulks, the company’s chief operating officer; Marcus Stevens, who was senior Creative Director; and Vice President of Culture Amy Larkin. To put it plainly, he wants to become one of those people. The do-what-it-takes culture inside Under Armour’s Baltimore campus is such that this is attainable. “They are the people who did it all,â€ he said. “I spend my time figuring out how I put my stamp on a company that’s so big.â€ said Mr. Duncan. “That’s my challenge. Is it shoes? Is it clubs? That’s what gets me going.”

A humble, but fruitful, beginning

Mr. Duncan says that he began his career as a sales account executive for Capital Broadcasting in 1997. There, he met Evelyn Booker, a mentor who he says changed his perspective on what it means to be a professional.

“She taught me not just how to sell but how to be a professional. She taught me some basic practices like going a long way. Like the importance of a handwritten note to say thank you, how to follow up, and the importance of being confident in your ability to do what you do. Sometimes I didn’t know if we were having business meetings or Bible study.”

He also worked for a time for the NBC affiliate in Raleigh, then to the owned-and-operated NBC station in Washington D.C. Mr. Duncan then moved on to a stint as vice president of broadcast sales with the Washington Redskins — where he interviewed with the team’s mercurial owner, Daniel Snyder. “We didn’t agree on all fronts, and in fact I think one of the reasons I got the job is because I didn’t agree on all of his viewpoints,” Mr. Duncan said with laughter. “I think he really appreciated that I had my own point of view.”

“That gave me the foundation that I needed to be successful. We’re all selling something every day whether you realize it or not.â€

He might be American golf’s future. On July 14, Mr. Spieth holed out from the left side bunker on No. 18 to force a playoff with David Hearn and Zach Johnson and went on to win the John Deere Classic. He turned 20 thirteen days later. In his rookie years, he was the runner-up three times and tied for most top-10’s with nine, joining Brandt Snedeker and Tommy Haas. He is now No. 22 in the Official World Golf Rankings.

“The sky is the limit,â€ for Mr. Duncan said Mr. Spieth, who will this year wear an iteration of Under Armour’s first golf shoe. “We’ve had a lot of good up-and-coming American golfers but we haven’t had someone who’s made the kind of impact so early in their career arguably since Tiger Woods. In terms of what he could mean to the game it’s bigger than Under Armour.â€ The other golfer to endorse Under Armour is the golfer Hunter Mahan. “He’s literally carried us on his back for the past seven or eight years. He’s allowed us to be relevant in the golf space and build awareness more and more with his performance.â€

Both players were members of the 2013 President’s Cup team. At 19, Mr. Spieth became the youngest to ever win a PGA event. By comparison, Phil Mickelson, Rory McIlroy and Tiger Woods each won their first tour events at 20.

If successful, Mr. Spieth’s emergence as a hopeful superstar will bolster Under Armour’s presence in the global space. The industry has struggled with cold weather across the globe and participation is down. But new technology like Under Armour Men’s ColdGear Infrared Elements Storm Â½ Zip Jacket, which retails for $85, is the kind of impact the brand is seeking to make versus its competitors. The cold ” really plays right into our hands,â€ Mr. Duncan says. “Inclement weather is when our brand thrives. We are a performance apparel company, and our CEO is saying that over and over again. We make gear that allows you to extend your golf season and that’s a very big part of what we do. We like it cold. That’s why golf represents a huge growth opportunity for us not just here in the U.S. but internationally as well.â€

Mr. Kuehl, an 11-year NFL veteran, said that the three major goals are to see increases in the golf brand’s internal brand awareness, sales and distribution. The approach to growth is multi-layered, he said, and he relies on Mr. Duncan to oversee the release of new product line offerings and manage “what levers to pull that are going to make the biggest impact.”

“He’s really in charge of global brand messaging, in part because he has a really good feel for the consumer. He’s got a real strong experience base to pull from and I couldn’t have a better partner as we grow the golf business for Under Armour,â€ said Mr. Kuehl. “Leon is one of the more creative smart people I’ve been around and I think his passion comes through every time he speaks about growing our brand.â€

For expansion, Under Armour’s got sole

If Under Armour is operating from the premise that its apparel makes players better, the next logical step in transformation for the golf brand would be in equipment: bags, balls, clubs and footwear. Mr. Duncan says developing footwear is certainly in the cards for Under Armour. Until now, both Spieth and Mahan have worn a shoe made by FootJoy. Both will wear an Under Armour shoe this year that won’t go to market until 2016. It can’t come soon enough: Golf shoe sales account for between 20 to 30 percent of all golf apparel sales, and sales of non-cleated shoes increased a whopping 136 percent in 2012 versus 2011, according to Golf Datatech.

As for golf equipment? Mr. Duncan says he doesn’t rule out a future in which Under Armour expands in that fashion. “The problem is that right now there’s plenty of golf manufacturers out there, and everybody’s not doing well. The golf market in general is still in a space of rebounding from when things bottomed out. A lot of golf equipment companies and specialty retailers didn’t make it out of that unscathed.â€

But as it concerns the junior game (Under Armour is an official sponsor with the Junior PGA), Mr. Duncan has an interesting personal connection in making sure that the brand appeals to the next generation of players. Under Armour believes it’s the premier brand for the next generations of athletes. He’s been as low as six handicap, but plays at an 11 now, a bloated number he predicts will go down when his son, Royce, is old enough to play. He is just 5.

4 Ways to Find The Right Mentor For Your Business