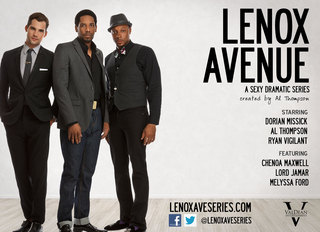 Harlem has been the scene of many movies in the past like New Jack City and Juice.

But with the growing changes in the historic neighborhood of Harlem and gentrification, a new series is depicting the lives of 3 friends (2 black, 1 white), who live on the neighborhood’s most historic strip.

According to Lenox Ave creator Al Thompson, the new web series they have launched is about the new Harlem.

“There’s a Love Jones, Boomerang type of vibe to it. The show follows their lives as they live, love and laugh,” said Thompson.

Produced by Thompson and his partner Brian Rolling’s “Valdean Entertainment,” Lenox Ave has the look and feel of something you might find on HBO or Showtime.

“I want people to see this show and think ‘Why isn’t something like this on television right now?’ I like the online aspect. The music industry has taught us a lot about sharing, social media and the economics of beingÂ entrepreneurial,” said Thompson, who has held a few events for the series and has a strong social media presence.

Unlike a lot webÂ series’, Lenox Ave features a number of recognizable faces including Thompson (Love Don’t Cost a Thing),Â Â Dorian Misick (Southland), Michael K. Williams (The Wire), Vanessa Bell Calloway (Coming to America) and others. Additionally, the show is very diverse, which is reflective of today’s Harlem.

“I like to entertain people and we definitely want folks to have a good time with the show and share it amongst friends. I want them to enjoy seeing themselves and seeing what the world offers in multi-cultural content. It is not just check boxes and having an Asian person, a white person, a black person or whatever. This is life,” said Thompson.

After you check out the first episode, let us know what you think in the comments.