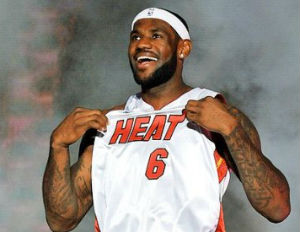 As if he wasn’t already having a good enough year, LeBron James can add another accolade to an already stellar 2012.

The reigning league MVP, Finals MVP, Gold medalist and NBA champion has the league’s top-selling jersey, it was announced by the NBA on Wednesday. Oklahoma City’s Kevin Durant follows at No. 2, and Kobe Bryant, who’s held the position six times since 2001, sits at No. 3.

The NBA also announced that NBAStore.com had its largest Cyber Monday in history, with at least a 10 percent sales increase from 2011. Adidas, the official apparel supplier for the NBA, released its Christmas Day game jerseys which is a likely cause for the boost in online sales.

James took the spot from the injured Bulls guard Derrick Rose, who slipped to No. 5.

The resurgent New York Knicks have the league’s top selling team merchandise for the first time since 2004. The cross-borough rival Brooklyn Nets were ranked seventh in the survey.

LaLa Sets Up Pop Up Shop in Atlanta