On The Job Training: Learning The Job While Doing The Job 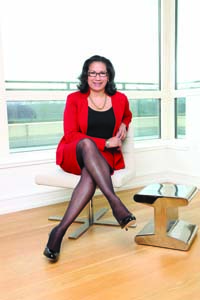 Elsie McCabe Thompson knows today that as as a child she suffered from attention deficit hyperactivity disorder. In fact, today she will tell you that she has a “host of learning disabilities.â€ Raised in Brooklyn, New York, where her mother was a nurse, her father a psychiatrist, and her oldest sister a model student, Elsie struggled through school. “There was no diagnosis at the time. There were only good kids and bad kids.â€ Her mother was advised to adjust her expectations and consider sending McCabe Thompson to trade school after high school. “My mother was having none of that.â€ Backed by her mother’s advocacy and the school’s eventual support, McCabe Thompson attended Barnard College and later received a law degree from Harvard.

“It takes kids a while to uncover mechanisms for coping with their [challenges],â€ she explains. “I never did well on in-class multiple choice exams. I would always see duplicity and double meanings and run out of time. I quickly discovered a different strategy. I wrote papers for everything; then I could control the outcome.â€

It’s McCabe Thompson’s ability to harness perceived challenges as strengths that led her to the presidency of the Museum for African Art in 1997–with no prior museum experience or knowledge of art. But having worked as a litigator at the law firm Shearman & Sterling and as deputy counsel to former New York City Mayor David N. Dinkins, McCabe Thompson has used her curious nature, passion in advocacy, political network, and savvy as a strategist to reposition the Museum of African Art as the arbiter of African culture throughout the diaspora.

Having raised nearly $90 million through grants and donations and amassed land that has been connected and rezoned, the museum–which has not had a permanent location since opening in 1984–will now have 90,000 square feet of mixed-use space in a prominent position on Fifth Avenue at the end of Manhattan’s Museum Mile. “God found the space for us,â€ says McCabe Thompson, the widow of North General Hospital President Eugene L. McCabe and current wife of William C. Thompson Jr., the former New York City comptroller and Board of Education president. “I couldn’t have imagined a better location.
It all came together at Fifth Avenue and 110th Street at the corner of El Barrio and West Harlem. It literally embodies our mission: a place that could bridge communities.â€

The Good, the Bad, and the Ugly: 8 Black Lottery Winners Who Hit Big