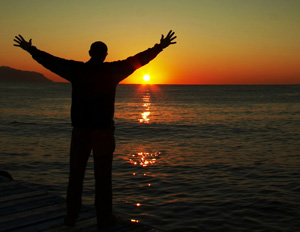 Austrian philosopher Martin Buber once said, “All journeys have secret destinations of which the traveler is unaware.â€ It is the unpredictability of which Buber speaks that gives travel its ability to facilitate growth among an array of individuals. I have been blessed to be able to travel the world; however, even as a seasoned drifter, I would be remiss to say I fully understood and connected with this concept of a twisted, pregnant journey. All of my experiences with travel have been the stuff of dreams (well-organized yet loosely planned and unrestricting) until the day I traveled to Malabo, Equatorial Guinea—a country on the western coast of Middle Africa.

Equatorial Guinea is a relatively unfamiliar place to most. When I mentioned it to friends as a forthcoming destination, many scratched their heads in wonder. Very little about the country is documented. Understandably so, considering the difficulty with which to obtain an entry visa, and myriad rules and regulations President Obiang and his government have set in place as a means to thwart potential coups (I was stopped, searched and had my camera stripped of its photos on more than one occasion). The newly independent, former Spanish colony does not boast a traveler-friendly infrastructure, despite its tropical splendor. It is still very much a country in development trying to find its footing (although, because of a recent oil boom, its developmental pace has increased exponentially).

I found myself in Malabo as a member of a newly assembled delegation calledÂ The Afripolitans, to participate in the 9th Leon H. Sullivan Summit. The summit, which began in 1991 in Abidjan, CÃ´te d’Ivoire under the leadership of the late Rev. Leon H. Sullivan, is organized to spark discourse between leaders of African nations and developed countries to bring awareness to the issues plaguing the continent, and create a sense of social responsibility and empowerment among the diaspora. Unfortunately, due to the media backlash following the foundation’s decision to convene in Equatorial Guinea, the beginning of the summit was overwhelmed with logistical errors. Irritation was visible on many faces. These setbacks, coupled with the country’s restrictions, began to undermine what would have been an enriching experience.

But then we spent time visiting an orphanage. I looked at the children whose attention I’d captured, and then at my Afripolitan colleagues, who were busy engaging with other children. In that moment, I realized that all the frustration I’d felt was fleeting. As Oprah would say, this was my “ah-ha moment.â€ There was a bigger picture. Patience and open-mindedness were key components to my enlightenment: neither extraneous circumstance nor set expectation would dictate my reality. Equatorial Guinea would serve as a reminder to practice mindfulness by living in and appreciating each moment for what it is, whether good or bad, as it is bound to teach a valuable lesson. No, my travel experience was not what I initially thought it would be, but strangely, it was just what I needed, and for that I am thankful.

Malcolm Jamal Warner on Being a Single Dad (on TV)