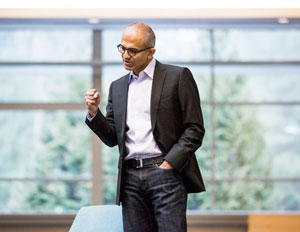 Satya Nadella's focus has been expanding Microsoft's cloud service offerings to other devices, including iOS and Android.

Microsoft’s latest change in direction could create the largest job cut in the company’s history.

According to Bloomberg and its unnamed sources familiar with the matter, Microsoft CEO Satya Nadella is planning to cut the workforce related to marketing, engineering, and other departments that overlap with Nokia as early as this week.

While this culling could be the largest in Microsoft history, it isn’t unheard of. In 2009, during then-CEO Steve Ballmer’s tenure, the Redmond, Washington company cut about 5,800 jobs.

The news comes just days after Nadella, who became Microsoft’s CEO in February, delivered a company-wide address declaring the current state of Microsoft as well as his plans to remain competitive and focused on its core offerings. “The day I took on my new role I said that our industry does not respect tradition — it only respects innovation,” said Nadella in his letter to employees. “I also said that in order to accelerate our innovation, we must rediscover our soul — our unique core. We must all understand and embrace what only Microsoft can contribute to the world and how we can once again change the world.”

It’s no secret that Nadella believes the cloud and mobile devices are the future. In a move that could be seen as a double-edged sword, Microsoft released Office 365, the company’s subscription-based Office product, for iOS as well as Android, showing its platform agnosticism, even with its own Windows devices lagging behind the two major players in terms of sales.

According to Bloomberg, the acquisition of Nokia added 30,000 jobs to Microsoft, with a large number of them overlapping with positions already filled at the company.