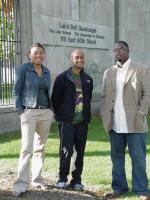 Before running for the U.S. Senate, Sen. Barack Obama served as a professor at the University of Chicago Law School from 1992 until 2004 and was a senior lecturer from 1996 until 2004. Members of the Black Law Students Association at the University of Chicago, though not present during his tenure, said that Obama’s accomplishments have opened up doors for everyone no matter what race they are. But his run and potential presidential victory has specific significance for black students.

“It sort of makes you feel like that ceiling is a little bit higher at this point. There are always going to be racial barriers. Diversity and race relations are still a huge issue for law firms. Seeing Barack Obama potentially be the president of the U.S. and break a huge barrier makes me feel like maybe it’s not going to be a huge struggle with my race as far as my ambitions,â€ says Venita Cooper, president of the BLSA.

Cooper, a second-year law student at the University of Chicago says that race absolutely plays a factor in why she will be voting for Obama. “I’m excited that this guy has taken a different path to success than every other leader before him,â€ she says.

Gizachew Wubishet, a first-year law student met Obama when he was running for U.S. Senate. Wubishet was making a documentary about the Chicago Housing Projects and he interviewed Obama because of his work helping to remove asbestos in the Altgeld Gardens Housing Project. “You could tell even back then, that even though he was only a state senator he had a lot of potential,â€ says Wubishet, 28, a native of Ethiopia. “His sincerity, his realness, just looking at his background and what he had already accomplished, you could tell he was going to be big in politics, but the [housing project still mattered to him].â€

Twenty-four year old Cooper, born of a Korean mother and black father believes that Obama’s perspective as a biracial person is a commodity for America and the world. Race isn’t a factor for Wubishet, but he thinks that the world will look at America differently if Obama is elected.

Richard Leverett says that Obama’s path opens up doors for people who use community service as an entrÃ©e to politics. “It changes the rules on how you develop as a politician. I can see that merit and hard work is involved but caring for the community is also involved,â€ says Leverett, a second-year law student from Gary, Indiana. “I think as far as raising the bar, it opens up opportunity across the board to all young lawyers who come from different backgrounds and have different pedigrees, and who are not first generation lawyers. I think it validates the career path or aspiration to care for others and work for people who don’t have a voice. Once you validate that it opens up the doors