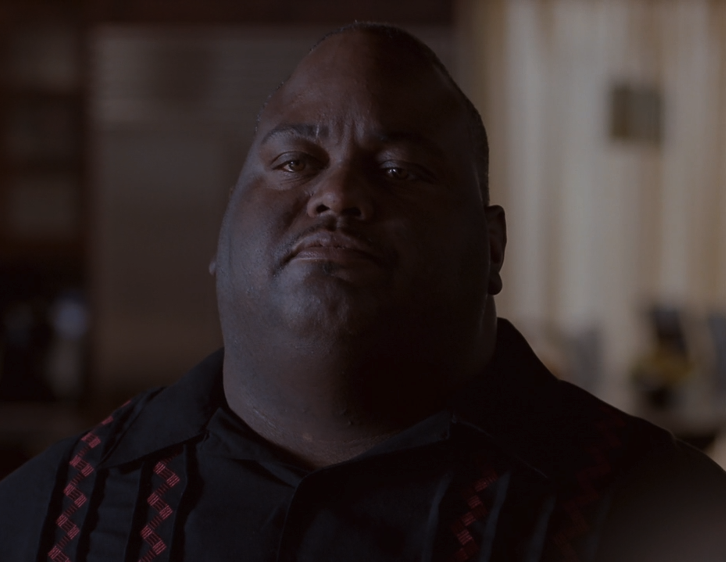 “Huell’s gone,â€ he tells Walter White, the series’ anti-hero and protagonist. “AWOL. Nobody’s seen him. He’s not answering his phones.â€

Huell, played by the stand up comic Lavell Crawford, was led to a safe house. What happened next is what sets up the series’ stunning Ozymandias: Huell, in fear for his life, confesses that he and his partner loaded Walt’s money — “seven barrels worthâ€ — into a van. They loaded it into a self-storage unit, says. The information helped Hank and his partner Gomie fool Hank into believing his money had been found and in danger of being destroyed. Walt hauled ass to the location where he actually buried the money–$80 million in cash–and, well, the rest is history.

Unlike Huell, Lavell Crawford answered his phone, from Dayton, Ohio where he was scheduled to do a weekend of shows. We couldn’t help but ask him about his character, the future, and what on earth is going on in Huell’s mind in that “safe house.”

Is everyone coming up to you, like, Hey, it’s Huell Babineaux!

You got your Comic Con fans — and I hope I’m not being disrespectful by calling them nerds because I have a little nerd in me, too. But it’s like a nerdfest; some people watch every inkling of the show. They break down everything I’ve done from pickpocketing Jesse Pinkman, to you name it. It’s a different fanbase. From BET Comicview, Last Comic Standing, Def Jam, Shaq All-Stars, to now? My audience has expanded big time. So yeah, now they know me.

How did you get the role?

Basically what happened was I had just got off the road doing comedy clubs and I just moved my wife and children out for about two weeks and we were still trying to get settled in. My manager who had been working hard for me said he got me another audition. It was about five-thirty in the morning. I said, Man, I’m tired I just off off the plane from being on the road. He told me it might be a recurring role for this show Breaking Bad and I think it might be a great opportunity. I had heard about the show but I hadn’t watched it. They asked me to come and read for Luscious, the tow truck driver. So I read for that. Then they asked me if I could read for this other part. A lot of times when they do that they see you playing a different role, so I read for the security guard. It was just a little part where he said, “We’re closed.â€ And they said, oh my God, you’re perfect, when can you start working? I said whenever. Next thing you know I got a call and I was on a plane to Albuquerque the next Wednesday. The rest is history.

Bill Burr’s character is like your right-hand man. You’re both comics, which is hilarious. What was it like working with another stand up? Was there a rhythm or understanding to how you wanted to play the part based on your similar experience?

Me and Bill worked on the road and knew each other from doing comedy. He was so surprised when I came on the set and saw him, because he had played on an episode before that. We saw each other and it was, like, Holy crap! It was great. We worked well together because his character was a smart-talking, bossy cat and here I’m this big ol’ midwestern, southern guy. He’s like the mouthpiece and I’m like the muscle. It just clicked.

The chemistry had a dark comedy element to it.

And even Bob Odenkirk who’s a comedian and improvisationalist — he knows about comedy, too. I think as comedians we just blend and know how to follow each other’s rhythm.

Have they talked to you about having a role on the spinoff show? (Odenkirk is expected to star in Better Call Saul.)

But what’s crazy is Bob asked me if I’d want to be a part of it I said, Hell yeah! Let’s keep it going! [Laughs.] Fall right into another hit show? The thing is Vince [Gilligan] is a hell of a writer and the way he works he’s got people already excited. So I’m looking forward to the outcome.

I think they’re waiting for Breaking Bad to end before they start. They inked Bob because his character was such a fun, interesting person. I think they’ll keep the ensemble together. I’m not gonna put all my iron in the fire. I guess I’ll just wait until they call me.

A lot of the things you’ve done on the show have had serious, serious consequences, from the intimidation of Ted Beneke, to pickpocketing Jesse, to talking to the DEA. Last we see of Huell, he’s in the safe house. What’s going through his mind right now?

In his mind, he’s waiting on Hank to come back. [Laughs.] He ain’t leaving that house without no protection. Plus, remember he’s thinking Saul done sold him down the river as a scapegoat and he’s already used him once before. Jesse knew he picked his pockets so, really, he’s just scared and can’t believe what he’s gotten himself into. Plus, Jesse’s dead, so he really doesn’t know what’s going on. So he’s just trying to lay low. He might have put the battery in his phone and made maybe one phone call but, hey. That’s it. He didn’t sign on to get shot.

Bob Odenkirk’s character seemed like he was about to get emotional. Do you think it’s because he cares about Huell or he fears for his life?

Yeah, well Huell’s his right hand man, his protector. He ain’t got no one to cover him, so he needs him. Really it’s like — even though he failed to protect him against Jesse who whupped his ass [Laughs.] — Huell is the last line of defense.

Everyone talks about how the cast of Breaking Bad is so close. What’s your take on that from your experience and did you feel a part of that?

Oh, yeah. I had just done Jimmy Kimmel Live on Wednesday. He called me last minute asking me to be on the show and dress up as my character. Aaron Paul was there. On the set of Breaking Bad, everyone’s hugging, shaking hands from the guy bringing water on the set, to the guy holding the boom mics to the director. Everyone was family. It was in Albuquerque so it was laid back. It wasn’t a lot of pressure like in Hollywood where it can feel like everything’s at stake, and people are kind of pretending to be something they’re not. It was almost like a workshop in that way. But except it’s on a hot, Emmy-winning show. I got to watch a lot of talented people make television magic.

They treated me just like one of the family, sharing stories, talking about our kids. I hated it was over. I couldn’t wait to go and film every time they called me. “Huell’s back!â€ And he just evolved into something that was very critical in the show. So it was a great moment in my life, man. All I can do is thank God above for the blessings to be able to be a part of something like that.

There had to be so much talent on that set, everyday.

There’s instances on the set of a hot show and the stars won’t say two words to you. And it’s like, Don’t go near that trailer! But Bryan Cranston was incredible. He was talking to people who were auditioning on one of the shows he directed. He told them what he was looking for. He actually came out and showed them, teaching these actors hoping to get a chance what he wanted. This dude’s been in several big movies! You don’t get that in Hollywood. One time he sat right across from me on Southwest Airlines talking to regular folks like it’s no big deal. Aaron Paul’s the same way. They really love what they do. When you see good people doing great work that makes you want to do better.

Did you get a tattoo?

You know what? I didn’t get to go to the wrap party! [Laughs.]

Yeah, we had our little baby’s issues to deal with and I didn’t get to go. And I was pissed off about it, too. I didn’t get a tattoo, but I probably would have. That was the first major thing I ever did. I’ve done some great things but nothing to the extent that the whole world was tuned in.

I drew my audience base into it too, because a lot of black people weren’t watching until I got on the show. Some of them were, but black folks, that’s how we are. If we don’t see our kind on there. “Man I wasn’t watching until I saw you on there!â€ But we’ll watch The Wire. Black-on-black crime? We’ll watch that. But crystal meth? That ain’t no black drug. Too much mathematics go into that stuff.